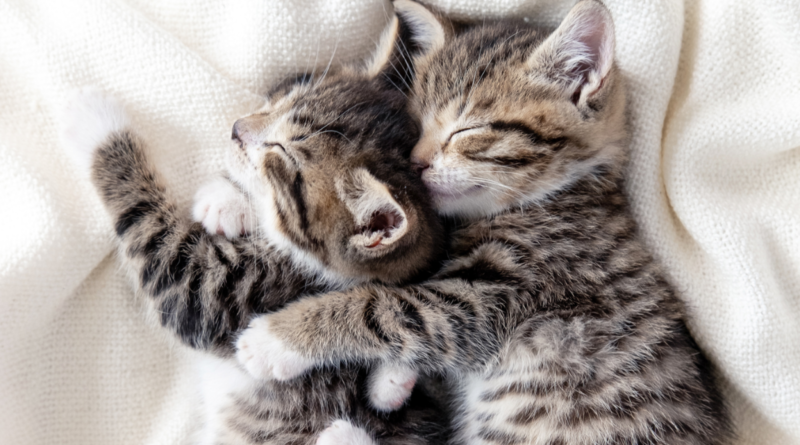 A video showing two identical cats enjoying an affectionate snuggle on their owner’s bed has got feline fans welling up online.

As the Blues Brothers once famously sang “Everybody Needs Somebody to Love” and the same most definitely goes for cats. While our four-pawed companions give off an aloof air from day to day, studies have shown that close contact is actually hugely important to overall feline health.

In 2014, scientists from the University of Queensland’s School of Veterinary Medicine in Australia divided 139 cats into two groups. For 10 days, one group of cats was gently stroked and talked to four times a day for at least 10 minutes. The other group, meanwhile, was completely deprived of attention or affection.

What the researchers found was that the first group of cats had more balanced moods and higher levels of immunoglobulin A antibodies, which guard against infection.

The second group, however, experienced more shedding and suffered from a disproportionate number of respiratory diseases. They concluded that warmth and close contact were an essential part of any happy cat’s life.

Perhaps that’s why viewers have been so enamored with the footage shared to TikTok by a cat owner posting as Paloma Chalandon. It can be watched here.

Describing herself as a “mother of two cats” Chalandon recently took to social media to post the heartwarming clip of her two pet felines snuggled up together on her bed.

Both of the cats can be seen stretching a paw over their sleeping feline friend with the two animals snoozing at close quarters, face to face, like the happiest of pet couples. As gestures of love go, it’s pretty strong and the affection on display is not lost on their owner.

Chalandon’s approval of their cuddles is audible in the footage, with the cat owner letting out an “aww” as she films them together. “Crying of cuteness,” she writes alongside the clip, which has already been viewed 2.4 million times.

She’s not alone in expressing this kind of sentiment either, with fellow cat fans flocking to the comments to talk about this most picturesque of scenes. Severine Callaud calls the clip “impossible to resist” with tatame branding them “the lovers.”

Mathilde_desm writes simply “Oh my God” upon witnessing the clip while xxlove_watermelon speaks for most by replying with a simple: “aww!” For miamercierrr_, meanwhile, it’s simply “too cute” with BabouO_o lamenting: “Even cats have a more intense love life than mine.”

“I have never seen such a beautiful picture,” Anissa adds with 20un.peu.de.tout similarly effusive, writing “I add myself to the hugs.” Thea Colados is similarly entranced, writing: “Your cats are so cute.”

With tearful emojis accompanying many of the comments posted alongside the clip, it’s fair to say there probably weren’t many dry eyes among cat fans picking up on the footage and evidently overjoyed at seeing two cat companions blissfully napping together.

Do you have funny and adorable videos or pictures of your pet you want to share? We want to see the best ones! Send them in to life@newsweek.com and they could appear on our site.