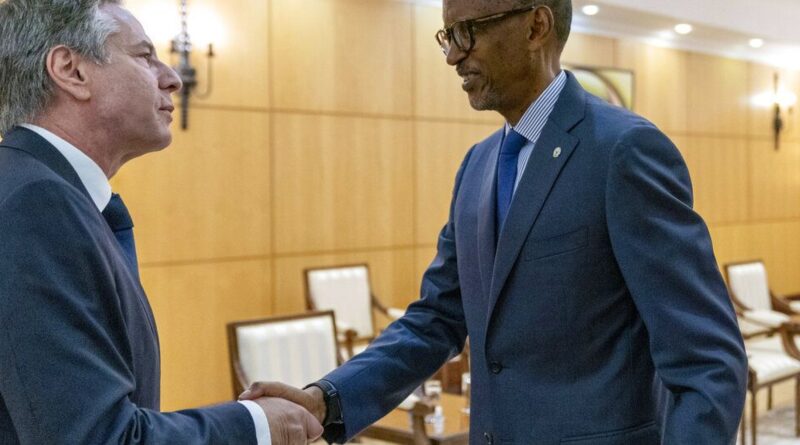 US Foreign Minister Antony Blinken has called on Rwanda to “use its influence” on the M23 rebel movement.

He also expressed his support for the Luanda agreement in finding a solution to the conflict in the east of the Democratic Republic of the Congo.

“If implemented, I believe it will provide a tremendous opportunity to end the conflict and hopefully bring lasting stability to eastern DRC,” he said, referring to an agreement reached under the mediation of Angola and calling for an end to the conflict in the east of the Democratic Republic of the Congo (DRC).

“A lot of that depends on the withdrawal of the M23, and we expect Rwanda to use its influence on the M23 to encourage that and get things done,” Blinken continued at a conference. Press in Washington.

The US Secretary of State also called on “all parties” to play their influence on the FDLR, a Hutu movement formed by some perpetrators of the 1994 Tutsi genocide in Rwanda.

Mr Blinken was speaking at the end of a summit of African leaders in Washington during which he spoke with Congolese President Felix Tshisekedi who had denounced the fact that his country was the victim of “disguised aggression via Rwanda”.

The M23 ( “March 23 Movement” ) is a former predominantly Tutsi rebellion that took up arms late last year and conquered large swaths of territory north of Goma, the provincial capital of North Kivu in the DRC.

Mr Blinken did not meet with Rwandan President Paul Kagame but the two officials had spoken on the phone before the Washington summit, he said.

The Rwandan president on Wednesday distanced himself from the heavy human toll of the fighting in eastern DRC, a border region of his country, saying that “the problem was not created by Rwanda, and is not Rwanda’s problem. It’s Congo’s problem. “

The US Secretary of State further stressed that the United States was “fully committed” to a solution while saying that it supported a settlement between Africans.

“The challenge now is the implementation of what was decided previously,” he said again, saying he had “some hope” of a settlement.

According to Congolese authorities, UN experts and American diplomacy, the M23 is supported by Rwanda, but Paul Kagame has rejected any link with the actions of the group.