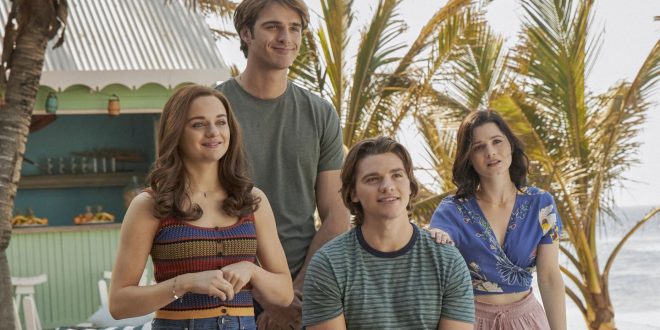 The first trailer for the third and final installment of The Kissing Booth trilogy is here! And not surprisingly, Elle is stuck yet again in another dilemma to choose between guys.

Stars Joey King, Joel Courtney, and Jacob Elordi are back, reprising their roles as Elle Evans and the Lynn brothers Lee and Noah. The Kissing Booth 3 follows Elle as she enjoys her last summer at a beach house before going off to college, ticking off a list of fun bucket-list experiences with her best friend Lee while also balancing her relationship with Noah.

But Elle has yet to choose which college to attend. Will she move across the country to go to Harvard with Noah or stay locally at UC Berkeley with Lee? Things get even more complicated when an old flame from the previous movie, Marco (Taylor Zakhar Perez), shows up. He helps her learn that “people pass through our lives. Some of them fade into memories, but a few become part of who you are.”

In the words of her mom Mrs. Flynn, played by The Breakfast Club star Molly Ringwald: “Maybe your choices have more to do with what other people want. Maybe it’s time that you think about what you want.” Elle has major decisions to make as she begins a new chapter in her life, and it comes with a cost: breaking hearts. It all goes down when The Kissing Booth 3 hits Netflix on August 11.