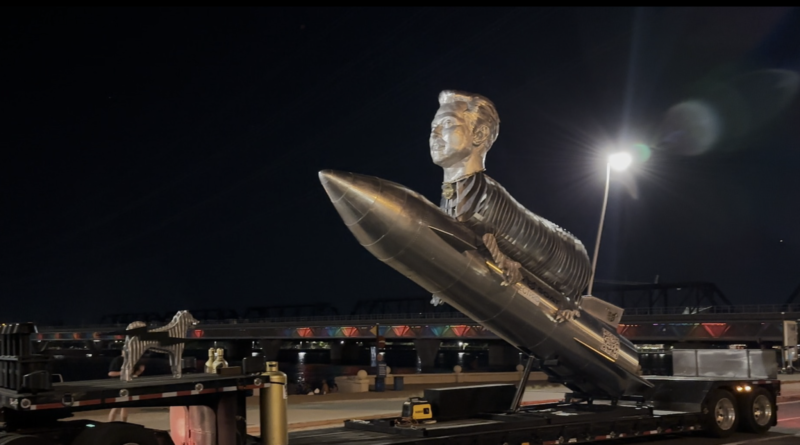 Despite tech magnate Elon Musk’s recent and constant drama with Twitter, his newest company, there can be no doubt that the man still has legions of adoring followers. One group of fanboys took their devotion to the next level this past Saturday, delivering a $600,000 sculpture of Musk to Tesla headquarters in Austin, Texas. The richest man in the world ignored them.

The fanboys made a pilgrimage to Tesla HQ in October as a stunt to promote their cryptocurrency company—Elon GOAT Token, or EGT—which sells a token of the same name. According to the EGT website, the company commissioned the sculpture to honor Musk’s accomplishments and tell him they think he’s the GOAT, the “greatest of all time.” The Musk sculpture, which weighs 12,000 pounds (5,440 kilos), features the Tesla CEO’s head on top of a goat’s body riding a rocket. The bust is also wearing a gold-plated dogecoin necklace. To date, however, Musk has disregarded their gifts.

That’s not all, though. The Wall Street Journal reported that the rocket Musk is riding can move and points to the sky as if it’s getting ready for liftoff. The sculpture is also equipped with gas lines to create flames at the back end of the rocket. Kevin Stone, a metal sculptor in Canada, made Musk’s head out of mirror polished aluminum over a period of six months. The goat body and the rocket, meanwhile, were made by Spectacle, an architecture and design company in Phoenix, Arizona.

EGT representatives told the Journal that their goal was for Musk to accept the 12,000-pound gift at the event at Tesla, which they named “GOATSgiving.” But the fanboys harbored an obvious ulterior motive: They wanted Musk to accept the gift and tweet about it to his 100 million+ followers, which they hoped would draw attention to their token.

“Elon tweeting us would legitimize the token,” Ashley Sansalone, the executive in charge of development at EGT, told the Journal.

Considering what happened when Musk fell in love with Dogecoin, which started off as a meme stock until the billionaire took a liking to it and started tweeting about it, Sansalone’s theory is certainly plausible. Currently, Dogecoin has a $12.5 billion market cap, according to CoinMarketCap, and is ranked #8 of all crypto tokens. With a rank of #3010 and a market cap of $4.2 million, EGT has a long way to go.

In the end, EGT didn’t go the way of Dogecoin. Musk never came out to claim his $600,000 gift. He didn’t acknowledge it on Twitter. Nonetheless, don’t think the sculpture is going into storage. The EGT team plans to take it on tour and use it to create an “Elon Santa” for Christmas.