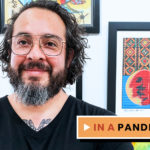 If not for the pandemic, this would be South by Southwest weekend, right?

It would be. Everybody’s talking about that. This is the one-year anniversary of when the universe stopped spinning on its axis.

How philosophical are you about that?

I’m feeling conflicted about it. The way the numbers look here in Austin, I was starting to feel hopeful about where things were headed — our director of public health, the other day, said, “If current trends continue, then we’d be in Stage 2, from a public-health system indicator.” That’s very close to everything being “normal.” And our governor lifted the mask mandate, and that sent all of my friends into a tailspin who work in either venues or bars. It’s like, “What are you doing, man? It’s not safe yet.”

Have your friends given reports about whether people in Texas are doing what the governor is telling them to do — are they flooding back to bars and other small indoor spaces and not wearing masks?

A friend founded this group called The Amplified Sound Coalition and they had a rally asking the governor to reconsider the mask mandate until 70% of essential workers were vaccinated, which I thought sounded reasonable, but of course there was no response from anybody about whether that was even being considered. . . . I can’t tell you how many times I’ve had friends of mine that are bartenders that have been like, “the only people showing up in large numbers at bars and being jerks are people from out of town.”

President Biden suggested July 4 might be a key date for gathering in groups. Is that reasonable?

He said July 4 you can celebrate with small groups. The nuance there is incredibly important. I don’t think that means we’re full-tilt in July. We’re still trying to find out when full-capacity kind of things are happening. I’m hearing that a lot of folks are thinking September is kind of the area.

Festivals and everything else?

Michael Rapino from Live Nation was saying festivals at full capacity are going to be happening again. When I read that I was like, “Clearly, this can’t be correct.” Maybe he knows more stuff than I do, which is entirely possible. Maybe he’s talking to other people with better data and better metrics. On another level, if there are better metrics and data for us to enjoy, where is that data, and why can’t we see it?

What else is going on at the Long Center?

Our Long Live Music outdoor, socially distanced series went on sale, and three of the four shows sold out really quickly. We’ve got into this rhythm with the outdoor things that are safe — you get your pod of up to four people, we bring you your food and drinks, you don’t leave your pod unless you have to use the restroom. People are incredibly respectful of the house rules. We’re taking extra precautions on the back end to ensure the artists are safe and doing extra testing and all those things that felt difficult before, or odd. They just feel like normal ways you’re doing business, like, “Sure, our stagehands will get rapid tests a certain number of days before.” Maybe it’s just a new day, a new world we live in.

Does that mean when I use the bathroom in punk clubs, it’s not going to be completely disgusting?

Emo’s on 6th Street has a special place in my heart — that was one of those first places I got to when I moved here in the early ’90s. There’s a rite of passage going to those bathrooms. . . . Some of those clubs, if they had pristine bathrooms, I would be concerned about the authenticity of the entire place.

How are the portals going for the Save Our Stages grants given to local venues? Since the Texas snowstorm a few weeks ago, have things proceeded more orderly?

We closed the portal Wednesday [March 10] at 11:59 p.m., so of the 74 venues that received an emergency grant, we have about 49 applications, which is a pretty good turnaround. Our team is digging into the process of reviewing all the applications and the financial data and verifying eligible expenses, so we can score and rank and release the list of folks that are going to get additional enhanced grants. It feels like we’re doing good work.

Is your mom sad that the snow melted?

Yes! She loves the cold weather so much that even in the middle of those very cold days, she was sitting outside. Now that we’re back up to 80 degrees, it’s miserable for her.

Tell her to come on over to Colorado, where I live. We just got two feet of snow.

Isn’t that funny, the subjective reality in which we live? The weather here got down to 7 [degrees] and infrastructure started crumbling, as if we weren’t in a first-world country. I was scooping snow out from my front yard to get enough water to be able to flush toilets, and that was 9 or 11″ of snow over four or five days. I guess it’s the same when there are heatwaves in the Northeast — there’s actually a concern for human life. I’ve produced ice-cream festivals when it’s 107 degrees outside.

That was a pretty special festival. Just getting to see 20 different ice-cream vendors in the same spot was awesome. It was also very sticky.