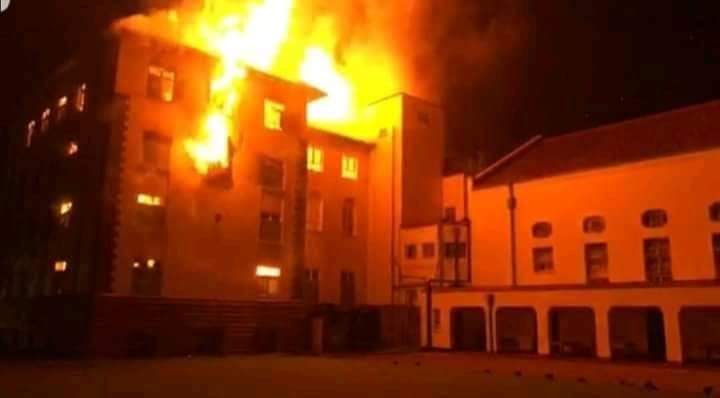 The fire is said to have started from the at 1AM from the right wing of the building extending to the left wing that shelters offices of the Vice Chancellor and student records plus a basement full of archive files spanning the whole history of the institution.

The most affected include the finance department and legal chambers.

According to the university, efforts to save the left wing of the building which houses the Human Resources and staff records of the university were being defeated by the highly powerful flames whose blaze was increased by the wooden furnishings.

The fire has after 8 hours been managed and put out by the fire brigade helped by the public firing the morning hours and the area put under security of Special Forces Command.

This comes hours to the President’s address in regards to the next steps in the fight against COVID19.

The Main Building with its unique 20th century British architecture is easily Makerere’s most recognisable symbol and was constructed with funds from the Colonial Development house was completed in 1941 under the leadership of George C. Turner, the then Principal, Makerere College.