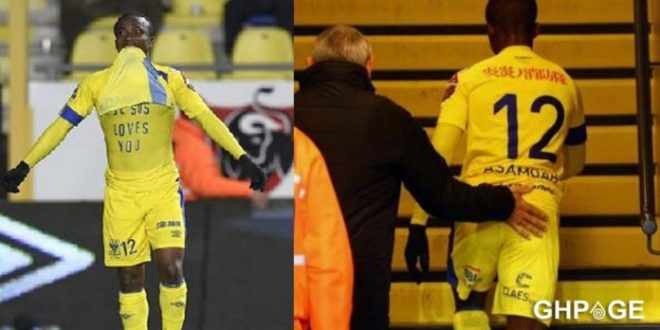 Footballer Chased Off-Pitch For Showing Off “Jesus loves you” Writing!

A Ghanaian footballer identified as Samuel Asamoah who plies his trade in the Belgian league has been handed a red card for displaying his religious beliefs to supporters after scoring a goal during a football match.

Asamoah was red-carded after receiving a second yellow card in St. Truiden’s 5-2 victory over Eupen on Saturday, February 8, 2020.

The 25-year-old showed off his striking prowess as his goals propelled his club to come from behind to record a massive victory.

The midfielder scored his first in the 42nd minute and added another in the 45th minute, before completing his hat-trick in the 63rd minute.

However, Asamoah did not complete the game, as he received his marching orders in the second half for partially taking off his shirt.

Asamoah had received his first booking in the 53rd minute and was sent off 12 minutes later after scoring and partially pulling off his shirt to display the message “Jesus loves you.”

Speaking in the aftermath of the game, the midfielder said scoring a hat-trick made him so emotional.

“Of course I knew that I was not allowed to do that. It was from sheer emotion that I did it. I am especially happy for our team and staff that we are playing such a good game and getting the three points,” he said.

“I can’t remember when I scored three more times. It must have been a long time ago. I like it. It is a shame that I will have to miss next week’s game, but I have every confidence in our team.”