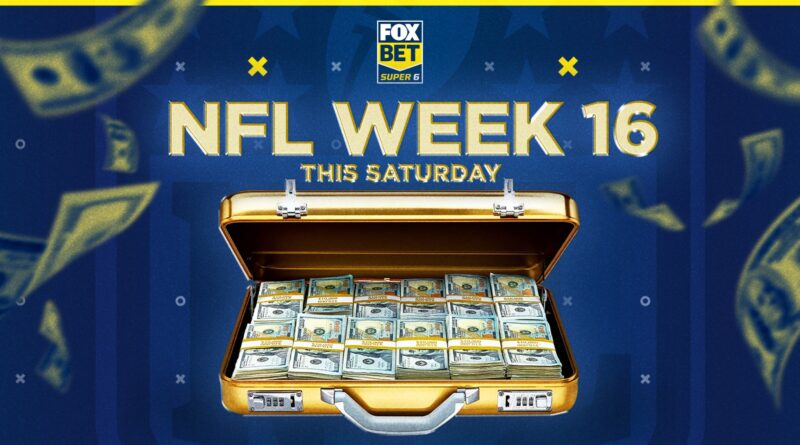 Raise your hand if still haven’t finished your holiday shopping for friends and family. Now keep that hand up if you’ve somehow managed to finish buying everything for yourself that you wanted.

We see you. And we feel you. No need to be ashamed. The holidays are for giving — even if it means giving to yourself.

Well, on that note, it’s a good thing we’ve got Terry Bradshaw. He’s coming in clutch with his $100,000 jackpot in the FOX Bet Super 6 NFL Sunday Challenge that, for this week, takes place Saturday. So this means you have a chance to pay yourself back for all of that fun holiday spending.

But only if you play.

FOX Bet Super 6 is a free-to-play contest where you pick the winners of all six marquee games with their margins of victory for a chance to win $100,000 in our NFL Sunday Challenge this Saturday. Just download the FOX Bet Super 6 app on your phone or mobile device, make your picks and submit your selections before Saturday’s games kick off.

And the highlight of the NFL Week 16 marquee matchups is undoubtedly America’s Game of the Week on FOX between the Eagles and the Cowboys. Can you imagine how big you’ll be bragging at your NYE parties if the Eagles-Cowboys matchup ends up helping you win $100K?

People really do win, so it could happen. And it’s free to play, it’s fun and it’s so easy.

But before you head over to your FOX Bet Super 6 app to make your selections, dive into our predictions for the week!

Nick Wright weighs in on whether the Kansas City Chiefs were exposed in their overtime win in Week 15 vs. the Houston Texans.

The Seahawks come into this game on a two-game losing streak, and that’s too bad for them as they’re facing a red-hot Kansas City squad. The 11-3 Chiefs have won seven of their last eight, they’ve clinched their division title and have secured a playoff berth. The Seahawks are sitting on the opposite end of the spectrum and are fighting to stay alive for the postseason.

Which way will the wind blow in this NFC vs. AFC matchup where KC is favored by 9.5 points at FOX Bet? Easy. It will be toward the Chiefs. But it will be a close affair.

Patrick Mahomes & Co. are one of the worst teams against the spread (ATS), with a 5-9 record in that category. So while their 11-3 straight-up (SU) record has them firmly in the playoffs, their record ATS is a reminder to backers to beware.

Geno Smith, DK Metcalf and Kenneth Walker will keep it close as they keep their eye on the postseason, but KC comes out on top in a tight one.

Prediction:
Chiefs by 8 to 10 points

Are Kirk Cousins and the Vikes invincible? From their wacky Week 10 win over the Bills to their historical comeback against the Colts in Week 15, it sure seems that way. Try all you might to knock them down, but they just keep rolling.

This Saturday will be no different for these Vikings that put up 518 yards of offense last week. Minnesota gets the W, but this contest will be close, too.

At FOX Bet, the Vikings are favored by 3.5 points. But it’s important to note that the Giants are 10-4 ATS this season. As a matter of fact, the G-Men defeated the Commanders as underdogs last week. Also, quarterback Daniel Jones is 15-5 ATS in his career as a starter when he’s a road underdog.

All trends point to this game being tight. But the 11-3 Vikings — aka Kings of the North — protect home turf at US Bank Stadium.

One thing you can count on in this football life is that the Falcons are gonna Falcon. Doesn’t matter if it’s Matt Ryan, Marcus Mariota or Desmond Ridder at the helm. The A is going to disappoint, regardless.

This week, the Dirty Birds face the banged-up Baltimore Birds. But after missing time with a knee sprain, QB Lamar Jackson is expected to return this weekend. Good news for Ravens fans and Baltimore backers.

In the Ravens’ Week 15, 13-3 loss to the Browns, backup Tyler Huntley went 17-of-30 passing, threw one interception and no touchdowns. While one could expect Jackson will be somewhat limited after returning from injury, his presence will definitely give his offense the kind of spark that Huntley could not.

Expect the 9-5 Ravens — a team positioned for the postseason — to beat Atlanta and give the Falcons their 10th loss of the season.

Prediction:
Ravens by 8 to 10 points

So what’s the verdict? Do you back or fade teams featured on HBO’s Hard Knocks? Well, when it comes to the Lions and their record against the spread, you definitely want to back them.

At 10-4 ATS, Detroit is one of the league’s best in that category. It’s a different story, though, regarding straight-up wins since they’re 7-7 there. However, that changes this Saturday.

We told you earlier this season that QB Jared Goff is not as bad as his critics claim. And honestly, the entire team has played with grits and guts all season, staying competitive in most of their losses. It’s not how you start, it’s how you finish. And currently, the Lions are engineering a finish that has them in the race for a Wild Card spot.

They won’t be letting the 5-9 Panthers stand between them and what most folks thought was virtually impossible.

Favored by 2.5 points at FOX Bet, the Lions will get the cover and the W over the Panthers.

Prediction:
Lions by 4 to 5 points

Everyone’s asking if Cincinnati’s Week 15, 34-23 comeback win over Tampa Bay was more about the Bucs or the Bengals. Major key alert: Bucs being bad is old news. It’s all about the Bengals.

Joe Burrow’s 3,885 passing yards are fourth in the NFL. His 31 TDs on the season are ranked second. Wide receiver Ja’Marr Chase’s eight receiving touchdowns are tied for fifth in the league. And the Bengals boast a top-10 rushing defense.

Cincinnati won’t struggle two weeks in a row. The Stripes will come out strong and put the Pats in their place early.

Prediction:
Bengals by 4 to 5 points

It wouldn’t be America’s Game of the Week without a little sprinkle of drama, now would it?

Jalen’s hurt. Will he or won’t he suit up? The Eagles QB suffered a sprain on his throwing shoulder in Philly’s win over Chicago. Oddsmakers were prepping for a Jalen-less NFC East showdown which swung the point spread to Cowboys -4.5 at FOX Bet. But Hurts said in his Tuesday presser that he could actually play against rival Dallas.

Is the Eagles QB trying to keep the Cowboys guessing to throw off their game plan? Or is he really getting on the gridiron in this pivotal game that could clinch the NFC for his team?

Whichever is the case, this game will come down to the wire.

The Cowboys come into this contest after blowing a 17-point lead and losing 40-34 to the Jaguars, so the Boys will have bouncing back on their minds. They’ve clinched a playoff spot, but better seeding would do Dallas some good as they try to shake the ghost of postseason’s past.

With players like A.J. Brown and DeVonta Smith at receiver, even if Jalen doesn’t give it a go, they’ll be in pretty good shape with Gardner Minshew at QB. The Eagles have the tools in their kit to rack up yards and points on a Dallas D that gave up 503 yards to Duval.

Expect a nail-biter because we’d have it no other way in this massive rivalry game.

Prediction:
Eagles by 1 to 2 points

Now it’s time for you to add some icing to your holiday cake and try your luck at Terry Bradshaw’s $100,000 jackpot.

After you download the app and submit your selections for the upcoming contest, be sure to share your picks with us by tagging @FOXSuper6 and @EricaReneeD and using the #EricaSuper6 hashtag across all social media platforms.