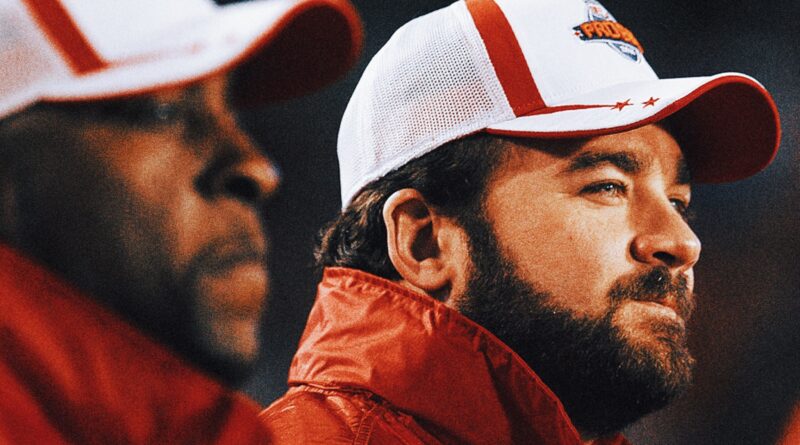 Frank Reich’s firing became inevitable for the Indianapolis Colts, a matter of when, not if.

After Sunday’s humiliating 26-3 loss to the New England Patriots, featuring one of the worst offensive performances in franchise history, the reality felt tangible in Reich’s voice addressing the media. There was the playcaller of an offense that couldn’t improve. The fingers had been pointed all round, dating back to last season. It was quarterback Carson Wentz, so they traded him in the offseason. It was quarterback Matt Ryan — Wentz’s replacement — so they benched him. It was offensive coordinator Marcus Brady, so they fired him. The Colts ran out of people to point fingers at. It was Reich’s time.

But understand this, too: The Colts’ offensive issues go far beyond Reich. One of them? The carousel at quarterback, the most important position.

For the new coach to be successful — in the interim, it will be legendary Colts center Jeff Saturday, who has no professional coaching experience, a stunning move — the franchise must find stability at the spot.

In Reich’s Colts tenure, which spanned 74 games (77, including the playoffs) in four and a half seasons, Indianapolis had seven starting quarterbacks: Andrew Luck (2018), Jacoby Brissett (2019), Brian Hoyer (2019), Phillip Rivers (2020), Wentz (2021), Ryan (2022) and Sam Ehlinger (2022), the current starter. It’s actually surprising Reich had as much success as he did — a 40-33-1 regular-season record (.547 winning percentage) – with bridge-option quarterbacks post-Luck. But that’s not a sustainable winning model, especially not one for a proud Colts franchise, to regularly contend for Super Bowls.

The remaining six acquired their starting QB via trade or free agency – the 2018 Saints (Drew Brees), 2019 49ers (Jimmy Garoppolo), 2019 Titans (Ryan Tannehill), 2020 Buccaneers (Tom Brady), 2021 49ers (Garoppolo) and the 2021 Rams (Matthew Stafford) – but only three of them were true stars: Brady, Brees and Stafford. Of the last two – Garoppolo and Tannehill – only Garoppolo made the Super Bowl, which he lost.

Offensively, a good chunk of Super Bowl-winning teams have star power at quarterback — usually homegrown, with them occasionally being acquired later in their career. But expecting a middling or old veteran quarterback who’s not a lock for Canton (like Brady or Peyton Manning are) to elevate your team to championship status is historically bad business. The latter is where the Colts have lived for years.

We’re barreling toward the Colts’ using their first-round pick in 2023, currently pegged at No. 15 overall and trending earlier, on a blue-chip quarterback prospect (Alabama’s Bryce Young, Ohio State’s C.J. Stroud, Tennessee’s Hendon Hooker, Kentucky’s Will Levis and Florida’s Anthony Richardson are among the top 2023 prospects at the position). They almost have no choice. They’ve been running on a hamster wheel with band-aids at quarterback since Luck’s sudden retirement. It would be organizational malpractice to continue doing so. And it seems unlikely that the new Colts coach is going to put his job on the line for Ehlinger, a former sixth-round pick, as the long-term starting quarterback.

If the Colts continue as they’ve been, and do not invest their top pick on a quarterback, their new coach could have the same fate as Reich: Find marginal success, only to be let go when the consistent disappointment becomes too much to bear.

Get more from Indianapolis Colts Follow your favorites to get information about games, news and more