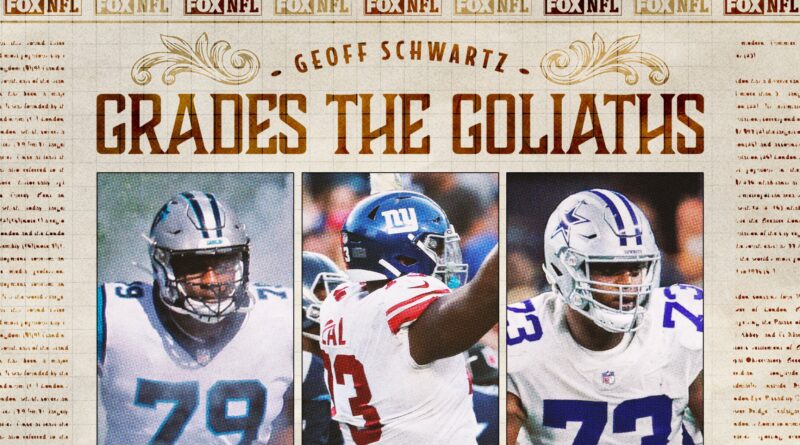 Welcome to my weekly series focusing on matchups in the trenches!

It’s something I’m passionate about, and I hope after reading these weekly reports, you will also become a fan of the big fellas. This week, I’m breaking down some of this year’s first-round offensive tackles. Let’s start with the seventh overall pick.

Run Blocking: Neal displayed good power out of his stance when working on the front side of zone run plays or base blocks and double teams. As we saw with his college film, he struggled a bit to stay connected to the defender as the play is winding down. His one big negative run-blocking rep was a down block against Titans DE Jeffery Simmons on a Giants ‘G’ scheme run in the third quarter. Simmons got up the field quickly to avoid the block from Neal and tackled the Giants’ running back for a loss.

This block is difficult for even a seasoned offensive lineman, so I don’t grade him as harshly as I would an older player.

Pass Blocking: Neal has all the tools to be an outstanding pass-protector but looked like a rookie at times on Sunday. He was beaten inside a few times, including early in the game. Then he spent the rest of the game getting edged a bit at the top of his pass set. He needs to stay square longer and/or not drop his back foot so he can finish at the top of the rep better.

He did strain to make sure his QB was not hit, which I value. When Neal was able to kick to his proper relative position, he was outstanding. He’s strong with long, powerful arms and once all his technique matches with his athletic skill set, he will be a dominant pass-protector.

Finish: Neal continually works to finish blocks and looks for work downfield when he’s free. I enjoyed watching him strain with his hips and feet to move defenders farther than they wanted to go, especially on double teams or base blocks.

As mentioned above, he does tend to fall off blocks when singled up on the front side of run plays. I appreciated his attempts to finish in pass protection, which was made tough with his poor technique at the top of his kicks. Finish is so often about your technique more than your will.

Mental Side: It did not appear that Neal had any mental mistakes in his first NFL game, which is impressive for a young player on the road. Considering the lack of mistakes…

Run Blocking: The Panthers’ offense looked so disjointed, and I think it showed across the offensive line, including with Ickey. He looked adept when the defender was in front of him or on the front side of a zone run. But otherwise it looked like a rookie playing against a good defense in an offense that wasn’t in a rhythm. He was falling off blocks or not making clean contact on the second level. There’s certainly potential for him to quickly become a top-end run blocker as the offense settles.

Pass Blocking: Starting your NFL career against Myles Garrett is a tough draw. The Panthers attempted to give Ickey has much help as possible the entire game. They threw quickly, had a tight end or running back near him, and on long third downs, they opted to just run the ball. However, when Ickey did have to block Garrett one on one, it did not go well. He was routinely beaten around the corner, leading to two sacks plus a few quarterback hits. Ickey’s pass sets were way too lateral (45-degree pass set), and Garrett was easily able to capture the edge.

Also, these lateral pass sets make switching defensive line games way more difficult. There were times when Ickey panicked and his footwork suffered. To be fair, plenty of offensive lineman panic in these moments, so it’s not that unique. His hands never seemed to match up his feet when he was paired against Garrett.

It wasn’t all bad, though. When Ickey did not have to block Garrett, he was far better. He looked like he belonged. He got to his spot and locked in his hands. So there’s plenty to build on.

Finish: This is a tough grade for me. It is not that Ickey didn’t attempt to finish when he was in position, it’s just that he wasn’t in position to finish often. Finish requires good technique. You can not move a defender with your hands out of whack and your feet/hips not in coordination.

Mental Side: I did not notice any glaring mental errors. Ickey was able to pick up pressure and understand where the defenders would be moving. I have to question his overall plan against Garrett. The defenders get paid also, so physically losing a rep will happen. But Ickey’s lack of game plan did not give him a chance for success.

Run Blocking: The rookie out of Tulsa is a powerful run blocker who will end up being one of the better at his position when his team wants yards on the ground. Against the Buccaneers on Sunday, Smith was smooth and efficient with his footwork when on the back side of zone runs. A backside cut-off block is one of the toughest individual blocks to execute, and he was nails at it, even sending the DT to the ground in a violent pancake. This is where the young kid will shine on film.

Pass Blocking: If you squinted hard enough, you could see Smith back at Tulsa because he looked exactly the same in pass protection: sloppy but strong. His hands were rarely in the right spot, but his ability to be strong and flexible to eat up a bull rush is remarkable. He puts himself in positions that would make most players break in half if they tried to anchor in the same way.

I do wonder if Smith moving back to left tackle on short notice (due to Tyron Smith’s injury) contributed to a lack of skill development at the position. Smith played left guard throughout the preseason, and for a player who struggles with hand placement, playing guard allows him to deliver a quicker and more effective punch. Once his hands are on the defender, the rep is generally over. So I don’t fault him too much for his poor technique at tackle because he hasn’t had enough time to figure it out.

Mental Side: Smith struggled a bit with his assignments against a complex Tampa Bay defense. For example, he let a defensive end get a free run at Dak Prescott when he believed he had to sort an inside linebacker pressure. He did not. These types of errors are ones he can learn from but cannot repeat. I’m sure the coaches are stressing to Smith the importance of hearing the entire playcall and communicating with his guard, who is now a third-string player.

I will always grade mental assignment errors more harshly than physical errors. These are ones you can avoid most easily.

Geoff Schwartz is an NFL analyst for FOX Sports. He played eight seasons in the NFL for five different teams. He started at right tackle for the University of Oregon for three seasons and was a second-team All-Pac-12 selection his senior year. Follow him on Twitter @GeoffSchwartz.