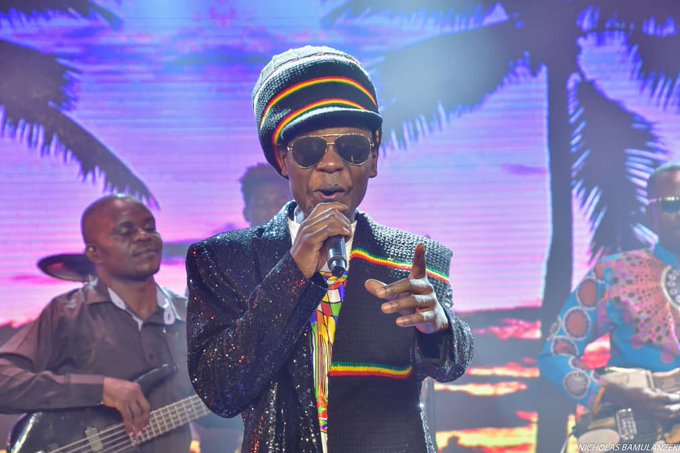 Reggea maestro has today evening brought the internet to a standstill after putting up a classic performance at the Club beats at home concert online.

The 48-Year-old did perform a few of his great songs including; Nakatudde, Irene, Omukwano, and Namagembe among others. While the concert was streaming on several pages, several comments came through from the audience that were closely following the concert.

Among the things that appealed so much to the viewers was the stage at large as many of them kept praising Fenon events for the well set stage and the coordinated light.

“No skimpy dancers but music is flowing” – a one Christine commented during the legend’s performance as one of the many viewers that kept highlighting this.

The other thing that the audience gave a shoutout to was the band that was very coordinated and knew what to do. We came to understand that Maddox always want’s his team to perform with him all the time and it was not any different this time just that he brought the majors from his band!

Along the way, a number of huge names came through throwing heaps of vibe on the maestro. “Good Vibes” – Dembe FM’s Eddy Ssendi commented as A Pass kept cheering on all through the performance.

One of the most entertaining things that could not go un-noticed were the moves that the Namagembe-hitmaker pulled off which were not the ordinary ones.

In terms of viewership the performance managed to pull of the most stable viewership ever since the Club Beats at home concerts started! As soon as Maddox got onto stage, their was a stable 2000 people-size audience that watched until the end. This is quite rare with the consumers of live videos as many of them get watch for some few minutes and drop off.

Maddox however dropped the bombshell after he was done performing and the host; Douglas asked him about the woman of her life who he though was the source of inspiration for Maddox’s love music.

When asked whether he was dating any of the girls he had sang about, all he said is; “In life i have one(wife) she’s enough.Though she’s from the Mbogo clan called Nabbanja, Hon.Nabbanja” This got Douglas wondering and whether he had heard it clearly that Maddox had a Honorable(Member of parliament) as his wife.

Even after leaving it at that, Ugandans on social media started looking out for the exact Nabbanja that Maddox was talking about zeroing down to the  State Minister of Health for General Duties, Hon.Robinah Nabbanja, a thing we as EJazz Media cannot ascertain.

According to an interview she did with Bukedde TV, ‘Omuntu W’abantu’ that aired on 08.04.2017, Hon Nabbanja Robinah identified Mr.Musafiri as her husband.

Immediately at the end of the concert, the video had a whooping 31,000-Views count. In simple terms it had approximately 30K viewers considering all the error margins in the 1K we left out. Maddox has however been known for pulling masses, the most recent being last year at his concert in October where he filled Sheraton Hotel even after he had headlined the ‘Tugende Mu Kikadde’ annual concert earlier in May.

Credit however should also be given to all the efforts that were invested in the whole concert at large not forgetting the very energetic performance by Karole Kasiita earlier.