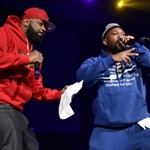 How to Watch Raekwon vs. Ghostface Killah ‘Verzuz’ Battle

Co-created by Timbaland and Swizz Beatz as a form of socially distanced entertainment in the midst of COVID-19, Verzuz is now in its second season. In recent months, we’ve seen the aforementioned D’Angelo set, preceded by Ashanti vs. Keyshia Cole, Jeezy vs. Gucci Mane, and E-40 vs. Too Short. A Verzuz spokesperson confirmed to Billboard that co-founders Swizz Beatz and Timbaland will be doing a battle of their own for the series’ one-year anniversary coming up.

Speaking of Tim and Swizz, they made industry headlines earlier this month when news broke that Verzuz had been acquired by the Triller Network, parent company of the Triller app. While Saturday night’s Verzuz will still be watchable on Instagram Live — as every battle has been since the start — fans can also check it out on Triller for the very first time.

You can watch it all go down Saturday night, March 20, at 8 p.m. ET/5 p.m. PT on VerzuzTV’s Instagram Live or you can sign up with Triller to watch on its new home.