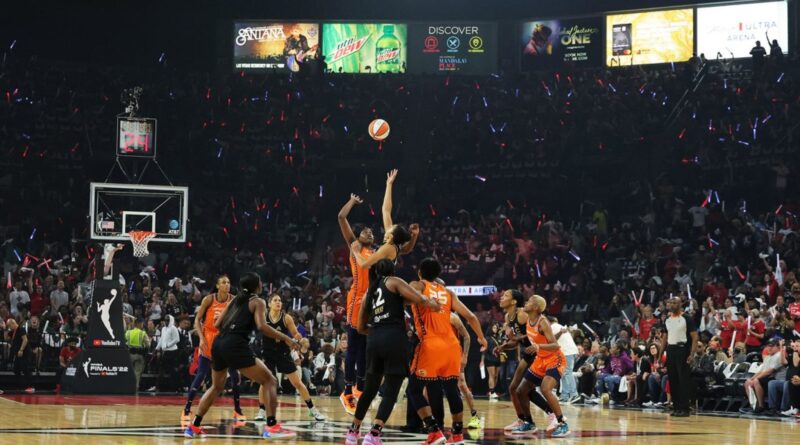 Jonquel Jones #35 of the Connecticut Sun and Kiah Stokes #41 of the Las Vegas Aces vie for the opening tipoff of Game One of the 2022 WNBA Playoffs finals at Michelob ULTRA Arena on Sept. 11, 2022 in Las Vegas.

The WNBA Finals are here! The Connecticut Sun and Las Vegas Aces are preparing to go head-to-head in Game 2 of the 2022 WNBA Finals at the Michelob Ultra Arena at Mandalay Bay Resort and Casino in Las Vegas on Tuesday (Sept. 13).

Although ABC hosted Game 1, the remaining WNBA finals games will air exclusively on ESPN. Game 2 kicks off at 9 p.m. ET on ESPN, while Game 3 is slated to take place on Thursday (Sept. 15) at the same time. If necessary, Games 4-5 will be held on Sunday (Sept. 18) and next Tuesday (Sept. 20).

How to Watch the 2022 WNBA Finals Without Cable
No cable needed! You can stream the 2022 WNBA Finals (on your TV, laptop or another device) with a free trial from a platform that carries ESPN, such as Fubo TV, YouTubeTV and DirectTV Stream, the latter of which is discounted to $49.99 a moth for the first two months, but only for a limited time.

Meanwhile, Hulu + Live TV offers 75+ channels for $49.99 a month for the first two months, thanks to a special sale that ends next month. Save $20 over two months when you join Hulu + Live TV by Oct. 5. Besides live channels, the subscription includes Hulu, Disney+, ESPN+ and unlimited DVR.

Streaming from outside of the U.S.? Use ExpressVPN to watch ESPN, Hulu and more.