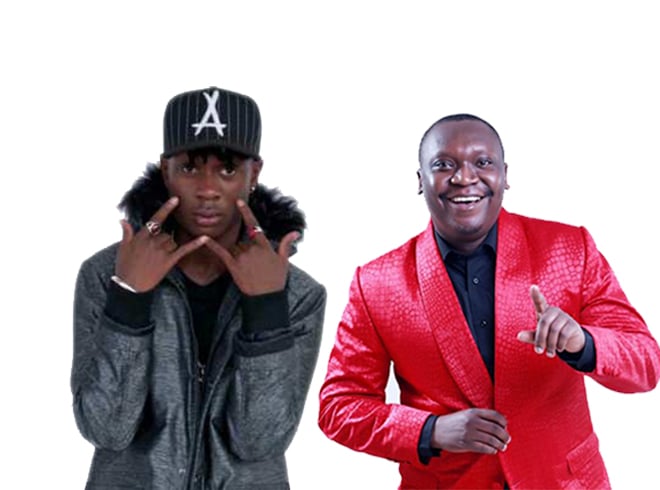 I felt Like a father whose son had graduated in first class. – Comedian Salvador on How He Got Fik Fameika On His First Big Stage!

Ugandan Comedian Patrick Idringi aka Salvador has come out to narrate the part he played in Fik Fameika’s life story.

In a lengthy and emotional social media post Salvador narrates how he met a young boy and liked his rap skills at the very first time. He also narrates on how he braved attacks from even organisers and promoters to see the talented boy with less confidence get onto his first big stage ever.

Below Is Salvador’s Story

I remember sometime back in 2016… I’m hosting the Jazz Comedy at Laftaz .. at the end of the show I like teasing artists to a freestyle, I as DJ Jamal (may his soul RIP) to play me an instrumental, boom I see Gravity omutujju passing, I’m like come thru and he looks at me like I’m crazy… a young boy comes back stage and tells me I’m a rapper, he’s look alone was of a Star but his confidence was lacking, I asked him what rap do you do, he says Lugaflow, I’m like okay come and show these big boys what you are made of, this guys comes and throws one of the sickest freestyles I’ve ever heard and his swag, I knew I was looking at the next big thing, I was like what????? So I promised to get him gigs coz I hosted a lot of shows … my busy schedule didn’t allow us to meet much but when the opportunity came I said I know a guy that can turn heads .. One of those many gig I got him and the most notable one was at The Kampala Sheraton Gardens, Club MegaFest feat Sauti Sol 2016, I call my Boy and tell him I got you an opportunity of a lifetime, you better jump on that Boda and make your way here now, and he humbly obliges and makes it to Sheraton, I get him in, he is nervous as hell coz all the big boys are performing and I haven’t called him yet but my assurances of I GOT YOU keep him at peace …. just a few minutes before the main acts Maddox and Sauti Sol go on, I call a boy hardly known ..to the stage… the organizers and promoter of the show almost eat me alive .. “who the Hell is that guy you’ve called on stage, we have no time blah blah..” they lamented. I stood my ground and said “just listen.. I’m the host of this show, I know what I’m doing.. “ Scared, the boy almost fails to make it on stage.. I tell him again “don’t worry I got you”… he goes on stage and .. just so you know.. I felt Like a father whose son had graduated in first class.. I cried (They say the rich also cry).. the crowd went WILLLLLDDDDDD… fast forward 2018… he’s won awards, released dope videos, travelled the world, done amazing collabos yet still remains shy and Humble.

I’m proud to have known him before .. and will always support him in his after. He is super talented yet humble (I pray you stay this way) and his name is FIK FAMEIKA

S/O to his management team for a Job well done

For starters. Fik Fameika(Original Names, Shafik Walukagga) is one of the most trending new kids on the block. With less than three years on main stream , Fik Fameika has risen very fast to the top of the music game through his creative lyrics.

However, many people have criticised him for duplicating several instrumentals(over 50% of her songs). Nevertheless, Fik has not given up as he actually has bragged about his style saying it’s creativity.

He has hit songs like, Pisto (which was his very first major hit), Mafia, Kutama, Sconto and My Property among others.