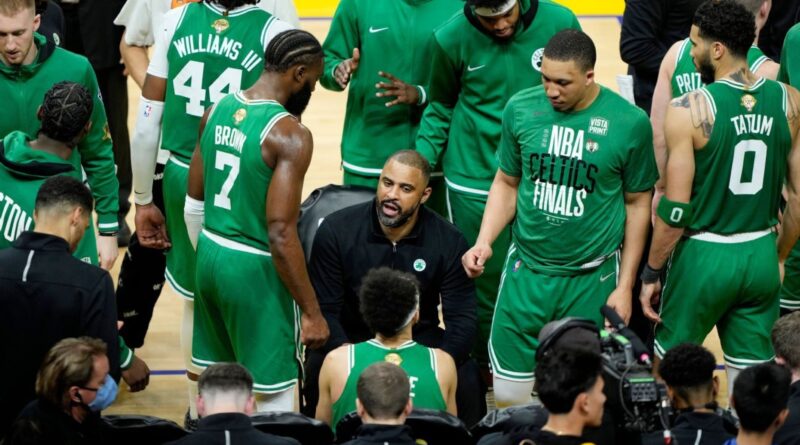 Not one uniformed member of the Boston Celtics had played in an NBA Finals game before Game 1 on Thursday night. Much was made of this, partly because of the vast Finals experience of the Golden State Warriors but mostly because storylines at this stage must be truffle hunted until no soil is unturned.

There has to be something to this experience thing, right? The lights are brighter, the stakes are higher and the Warriors’ core is in its sixth Finals in the past eight years, attempting to win their fourth. The question was asked, in just about every form possible, and the Celtics players responded by shrugging and repeating some versions of “basketball is basketball.”

The one exception was their coach, Ime Udoka. When asked before Game 1 to do his part to further the narrative, he said, as gently as possible, “Well, our staff has some experience. I’ve been to two myself … but I’d say [experience] is overrated in general.”

Those two sentences are related. Udoka’s experience — to a degree — negates the inexperience of his players. He played two seasons with the San Antonio Spurs and was an assistant coach under Gregg Popovich for the Spurs’ trips to the Finals in 2013 (a loss) and 2014 (a win).

Arms folded, he stands on the sideline exuding a calmness that approaches serenity, as if there’s nothing that might happen in a basketball game that would either surprise or confuse him. His most difficult moments of his first season as a head coach came when his team was foundering (with a record of 16-19 at one point) and everyone around him wondered why he wasn’t screaming at his players and throwing things around the room. It turns out he didn’t destroy the room because he was too busy reading it.

It’s Udoka’s ability to project calm — as much as Al Horford’s wide-open lunch run 3s, Marcus Smart’s defense and Jayson Tatum’s ability to pivot from shot-maker to playmaker — that has changed the conversation and put the Celtics up 1-0 in the series heading into Game 2 on Sunday (8 p.m. ET, ABC and on the ESPN app).

“In general, we have guys who stay even-keeled and don’t get rattled easily,” Udoka said during Saturday’s media availability.

They proved it in Game 1, running their opponent off the court with a fourth-quarter onslaught that wilted the experienced, battle-tested Warriors.

The Celtics started the fourth down 12 — and no longer interested in missing shots. At one point, they scored 17 unanswered to run their lead to 14. It was many things — remarkable, stunning, seemingly unending — and Udoka never once changed his expression.

“He’s obviously had to work his way to get here,” Tatum said of his coach. “He carries that sense of toughness with him and does instill that into the group every day.”

During Boston’s fourth-quarter run, Udoka made two unconventional moves: He called timeout, and he did it twice in 30 seconds while his team was rolling. At the time, it felt like Udoka was doing Warriors coach Steve Kerr — a man in possession of one measly timeout — a favor, playing the role of a cooler at a craps table.

With Udoka’s team up six at 109-103 with 3:47 left (nine points into their 17-point run), he responded to a missed Stephen Curry 3 and a Payton Pritchard rebound by calling the first timeout. He called another one 30 seconds later, after the Celtics had scored again and Draymond Green had missed two free throws.

The Celtics had four timeouts before he called the first, so Udoka was going to lose both in the final two minutes. Still, it’s counterintuitive to stop the flow of a massive run — twice! — by pulling your team aside to reassess the moment.

But it was Udoka’s way of making sure his team knew the job wasn’t finished as well as an obvious sign of respect for the opponent. Everyone knows how the Warriors operate: They’re never more than a quick miss and a turnover away from stringing together a few 3s of their own and reenergizing the crowd. Any lapse of concentration can spell trouble. It’s one thing to make a ton of 3s — the Celtics hit seven in a row to start the fourth — and another to start expecting it. By disrupting the cadence of the game, the man whose first name means “patience” did his part to keep the floor from becoming scattered and allowing the Warriors back into it.

The message was clear: The heavy lifting is done; don’t squander all that hard work.

The Warriors walked away attempting to convince themselves that they “dominated the game for the first 41, 42 minutes,” as Green put it. But from there, when it mattered most, the Celtics dominated while Udoka orchestrated it.

“He coached with the greatest ever to do it in Pop,” Smart said. “He’s a sponge. Every place he went, he soaked it all in, put it into his game and brought it over here to us.

“It’s all about energy. If the energy’s right, you’re going to rock with it. If it’s not, then you’re not. It’s plain and simple: I think the energy has been contagious to us all.”

It might seem unconventional, but sometimes it’s best to direct that energy toward controlling everybody else’s. It’s the kind of move that looks a lot like the product of experience.