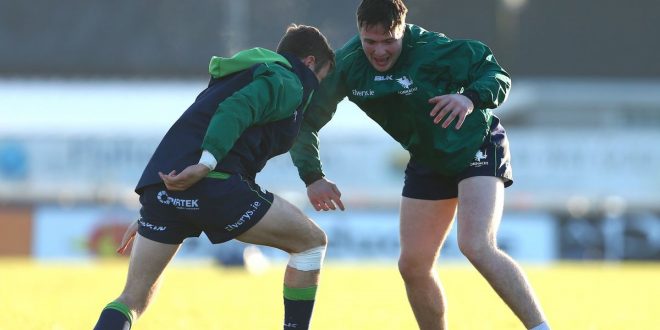 Jack Carty’s Vegas dream is to face off for Ireland against his brother Luke in Sin City in October.

But the Connacht no 10 has revealed that if he can’t revive his Test career in the next six months then he could follow his brother into moving abroad.

Carty, 28, started that ill-fated World Cup loss to the hosts in Japan but hasn’t played for Ireland since.

He was pleased that he had worked his way back into the squad for last year’s November internationals.

But the rails came off his plans while in camp.

“I was in for two weeks. I felt…I don’t know what the word would be, just embarrassed for myself,” the Dubliner admitted.

“I was, ‘This is my opportunity’. After the France game, I was like, ‘right, I’ll hopefully be in in the next two weeks and I can showcase my talents’.

“Look, it didn’t turn out to be the way I wanted it to be.

“There is no point moping about it, you have to get back on the horse.

“In terms of form, it was up and down. That’s probably what played me out of getting picked for Ireland at the end of the season.”

He missed out on the chance of playing against his younger brother Luke, whose Stateside move was rewarded with first starts for the US against England and Ireland.

“If I knew I would’ve had the opportunity to play against my brother it would have been really special,” admitted Jack.

“There’s a game in October so I’m hoping that if I play my best, I’ll get picked.

“If I perform well, I’ll automatically be picked because it would be great to be playing against Luke in Vegas!”

Carty is looking for consistency of performance from the start of pre-season on Monday – he believes that’s what Andy Farrell is looking for from him.

“But I’m disappointed that I haven’t kicked on and got more.

“There’s talent all over the place. If you can start week in, week out with your province you have a chance.

He was made up for Luke getting Test exposure and says his brother is “living the life” at the LA Giltinis playing alongside Adam Ashley Cooper and Matt Giteau.

“I can imagine that there are players all over the world trying to get there,” he smiled.

He would fancy a change himself if things don’t work out at home.

“There’s a probably a period of six months where I really need to push on,” Carty commented.

“And if I don’t…I’m probably not going to get the opportunity to live abroad when I finish playing, I’m probably going to go into the family business.

“If it starts to stagnate here, I’d hope there would be opportunities elsewhere.

“I wasn’t involved when Connacht won the PRO12 but I’d love to stay for the next three or four years and win something. We’re capable of doing that.

“A new stadium which is starting next summer, a new 4G pitch. It’s exciting.

“It’s see how the next couple of months go and there might be a decision to be made then.

“Too bad that Lukey and I only play 10 so I couldn’t link up with him towards the end of my career.”