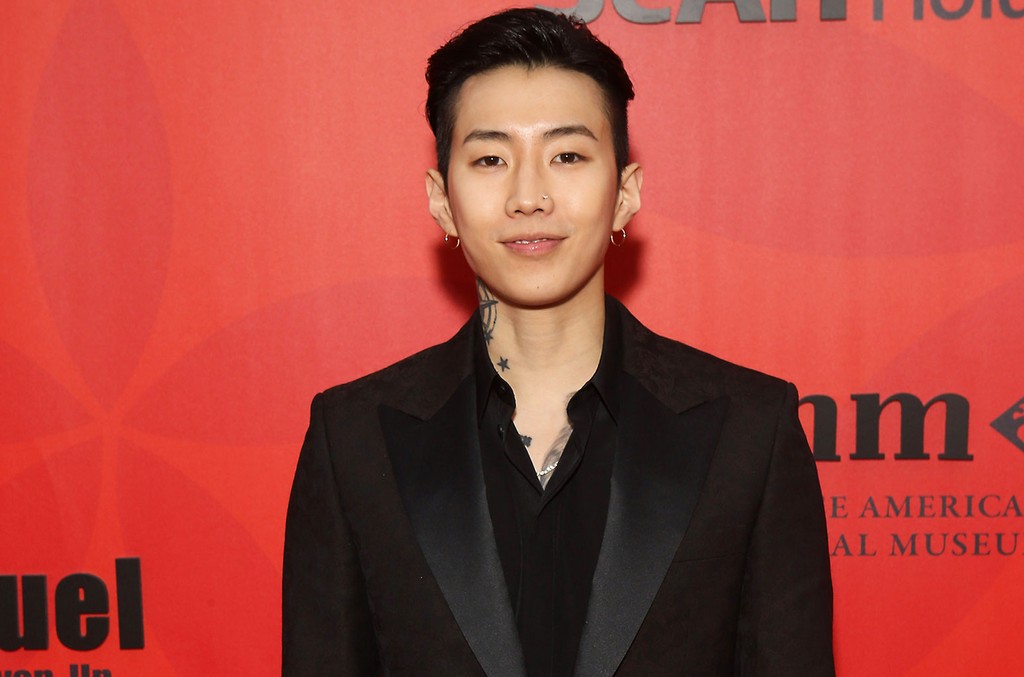 H1GHR MUSIC artists have been chosen as the cover artist of Billboard Korea Magazine’s 5th issue. Since its launch in 2017, Jay Park’s H1GHR MUSIC has been focusing on expanding the label and its roster of talent, who’ve been making appearances on hip-hop related TV shows such as Dingo Freestyle and Show Me the Money while consistently dropping new albums.

With their first compilation album H1GHR : RED TAPE, H1GHR MUSIC is embarking on a journey to become the predominant hip-hop label in the country.

It all begins with the album’s grand intro track highlighted by Golden’s powerful vocals.

In-house producers WOOGIE and GroovyRoom teamed up with the guest producer BOYCOLD to fully embrace hip-hop styles that are popular nowadays, including trap, electronic music and drill. “Melanin Handsome” and “Check My Bio” feature the BK drill type beat, which is best represented by the American rapper Pop Smoke, and these two tracks call attention to Sik-K and pH-1’s musical interpretation of the genre.

“Closed Case” is a track that reminds you of West Coast hip-hop rappers, while “The Purge” is just fun to listen to with the arrangement of extreme sounds that make you feel like going wild in a mosh pit.

And, of course, the compilation gathers all the label’s rappers in a single album. Woodie Gochild’s catchy and clear enunciation and strong cadence can be enjoyed in “DDDD Freestyle”, and HAON’s spectacular tongue twister rap is well presented in “World Domination”. While the rest of roster shows off their musical artistry of rap in “How We Rock” and “Teléfono Remix”, new artists like BIG Naughty and TRADE L make their presence felt.

Following the release of HIGHR : RED TAPE, the label is set to drop the second compilation album, HIGHR : BLUE TAPE on Sep. 16, which showcases a completely different style from the first.

The mastermind behind this project is Jay Park, a leading icon of the Korean hip-hop scene. He shares the story about his first label-wide compilation album.

BB: What motivated you to do a compilation album for H1GHR MUSIC?

Jay Park: I kept asking myself, ‘How can we raise our game as a hip-hop label?’ I contemplated different ways that can showcase our musical identity while providing chances for the artists to really step up in their career. By putting all our work together, I thought it’d help the newer artists get more recognition. All in all, it was just something we needed to grow as a label.

I can imagine the great level of synergy as a team.

Totally. Take TRADE L for instance. He’s our newest addition to the roster and was not very famous until the release of our first compilation music video “How We Rock,” which instantly gained over a million views. That is not an opportunity a 17-year-old rookie rapper can usually have. Nowadays, there are so many rappers and outlets for performances are limited. So artists turn to putting out more productions and music videos, which in the eyes of the public can get quite overwhelming. Despite all that, our album kicked off with great responses and I feel grateful for that. It’s going to be a meaningful and motivating experience for the team.

I’d asked the artists to send in their work and I got a ton of it. There were just so many with various genres that we just couldn’t put them all in one album. So we ended up sorting them out with the sassy and somewhat heavy songs for RED and light, easy listening ones for BLUE. We put a lot of thought into naming each album. RED kind of symbolizes an angry bull. We wanted to convey rather passionate messages of “this is who we are” and “try to get to know us” through the tracks so named the album RED. With BLUE, which represents the sky and sea, we compiled songs that are more relaxing and pampering with the acoustic arrangements and the R&B sounds.

The pre-release songs before the official drop of H1GHR : RED TAPE on Sep. 2 are receiving some great responses.

Because RED is so strong, I didn’t think it’d be well received by the public. But to my surprise, “Arrival” and “How We Rock” reached over a million views with tremendously positive feedback. I’ve always believed in the saying “your efforts don’t go unnoticed” and this album actually proved it. I’m thankful that people are starting to acknowledge our sincerity and passion. To be frank, it’s not easy to put together such a successful work with so many artists getting involved.

What was it like to work with such a large group of artists? Any challenges?

Having the most experience, it just made sense for me to oversee the overall project while pH-1 took charge of the musical production. He’s got the talent and a lot of ideas, and more importantly, he shows consistency in his work. We ended up using a lot of verses that he wrote. Sik-K writes a lot of songs fast without compromising the quality.

When we were toying with the idea of compilation, I’d asked all the artists to send in their work and he was the one sending the most, which contributed to speeding things up. HAON owned his part, knowing exactly what he’s good at and what he needs to improve. He did an exceptional job with the verse and demonstrated excellent interpretation of the song. BIG Naughty and TRADE L, our youngest artists, definitely have that get-up-and-go attitude. With a little guidance, they managed to keep up with the rest. When GroovyRoom and WOOGIE laid some H1GHR-style beats, Sik-K, pH-1, Golden and I would add hooks to each. They have completely different styles when it comes to making the beats, which is actually great because we don’t end up having similar sounds. Woodie Gochild can also pull off some unique sound with a little direction and help. His rap sounds especially better in a video.

Finally, Golden can take any song to the next level with his hook and background vocals. He has such a unique gift of making every note and every word sound so distinctive. It’s very impressive. I’m sure they’ve all learned through this whole project that nothing beats the experience. It doesn’t matter how talented you are. Years of lessons learned and goals achieved can never go unnoticed. This project was more difficult than I’d expected but it turned out to be better than I thought.

With every artist being so unique with their own style, I assume a little clash was inevitable.

I’m sure there were things they didn’t agree with but they managed to follow along with trust, which I really appreciate. I was all ears when they were sharing their ideas but I also tried to be honest with them. I was still nice about it because they’re like my family but when they face the real world out there, they’ll have to put up with very objective, critical responses. I figured more constructive criticism would benefit their career in the long run. And this is why having the right people around you is important. They respect you and trust you, but at the same time they can tell you straight up. We have this mutual trust that made the whole process so much easier.

Is there any artist that surprised you?

I’ve known Sik-K and pH-1 for so long that there was nothing to be surprised about them. But with the rest of the team, it was a different story. I had no idea Golden would create such synergy with the group and write such great tunes and lyrics. Dong Hyun was just sick. The dude is too good for an 18-year old. He’s especially good with more melodic music. In “Arrival”, TRADE L had his part right before mine and he just nailed it, which I give him credit for because it’s definitely not an easy thing to do. With Woodie Gochild, I was honestly a little disappointed with what happened on Show Me the Money but after seeing a lot of positive comments on the “Arrival” video, I was super proud.

What would you want people to see through this compilation album?

The H1GHR MUSIC artists. They are all great people with some great work done in my view. Plus, they have so much potential to become better but I hate that I’m the only one who’s aware of that potential. I don’t know how much help I could be but I just wanted this project to help them get more recognition. It’d also be nice to let people know that we’re proudly making music under H1GHR MUSIC as H1GHR MUSIC artists, not an affiliate label of AOMG; we’ve never been an affiliate of AOMG.

To be honest, I never expected these guys to pull this off so well. Initially, I had doubts about Trade L when we were recording together but he turned out to be awesome and did a great job. He’s got good rhythm and tone, and he even writes pretty cool lyrics and puts up a great live performance, too. I can’t believe he’s only 17. But he definitely needs to be more natural with the camera. That’s the only time he does look like a rookie. [laughs]

You’ve been on the grind for your entire career being a K-pop idol, b-boying, starting your own label and doing TV shows as if there’s no limit to what you can do, and that resembles some kind of a father figure working so hard to support his family. What drives you to push yourself?

At first, it was all about just having fun. I like challenging myself and want to see if I have what it takes to do well when I try different things. That’s why I did a lot of collaboration with other artists. I also do it for the money because I have people to support. I know I have to be in a certain position with the fame and influence to be able to help them and I’ve been working hard to maintain that position. Now that I’ve done quite a good job, I intend to just focus on what I have to do.

And what would that be?

If there is something I can do that would open a door to another artist, then that’s what I will do. I try to be where I’m supposed to be – where I can be a positive influence on others. I enjoy working in synergy with someone. I don’t have huge vision in terms of my musical career anymore because what I have accomplished so far is more than enough for me. It’d be wrong to want anything more than that.

How do you see the future of H1GHR MUSIC? You seem to have great interest in doing world tours and going global.

The idea of a global market has always been on my mind. We’ve already signed with a few foreign artists such as souf souf who recently had his album released, and 28AV who’s done some work with Lil Mosey. We plan to promote the compilation album across the U.S. as well. I’ve learned to believe that you should take care of yourself as opposed to relying on others and expecting them to lay out the solutions for you. Instead, you should make the effort and search for your own answers.

This has always been my motto. Opportunities lead to more opportunities. We’ve made the compilation album happen for ourselves and now here we are being interviewed by Billboard Korea and making another opportunity for us to promote the album. Instead of settling for where I am, I strive to go higher and get better. Whether it’s the concerts, tours, fashion, video contents, music charts or what not, I’m always searching for ways to bring out the best results.