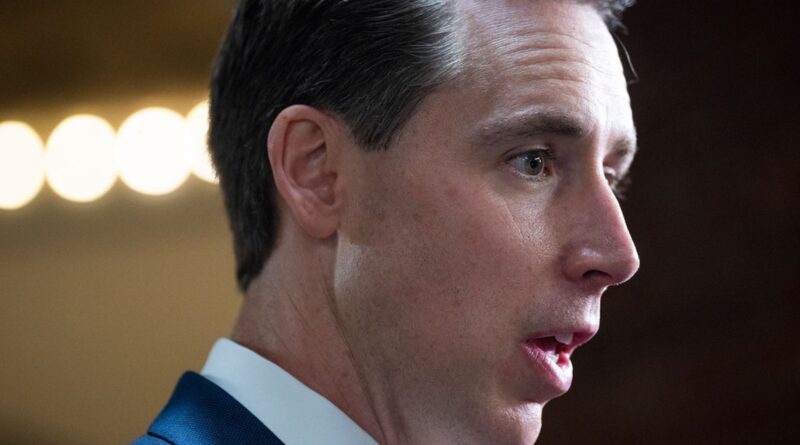 Running Up That Swill.

Sen. Josh Hawley, R-Mo., talks with reporters about the leaked draft opinion indicating the Supreme Court will overturn Roe v. Wade, in Russell Building on May 3, 2022.

While Josh Hawley has been fundraising off of an image of him raising his fist in solidarity with the insurrectionists who stormed the Capitol on Jan. 6, a revelation from the Jan. 6 hearings on Thursday (July 21) evening put the junior Republican senator from Missouri’s reaction to the Capitol rioters in stark contrast. Previously unreleased video footage showed Hawley fleeing from the rioters as they entered the Capitol, a far cry from defiant image he’s been plastering on mugs and other merchandise.

A Capitol Police officer who witnessed Hawley’s motion of support to the mob — who were attempting to delay or overturn the certification of a democratic election that has been repeatedly cleared of fact-free accusations of fraud — was paraphrased during the hearings by U.S. Representative Elaine Luria (D-Virginia). “She told us that Senator Hawley’s gesture riled up the crowd. And it bothered her greatly because he was doing it in a safe space, protected by the officers and the barriers.”

Once the rioters broke through the barrier of officers, however, ostensibly giving Hawley the opportunity to meet them face to face, the Missouri senator high-tailed it from the crowd, fleeing the Capitol. Twitter users (@The_Mal_Gallery in particular) wasted no time mocking his hypocrisy, using an inventive variety of running-related tunes to soundtrack the clip. Vangelis’ Chariots of Fire theme was present and accounted for, as was Kate Bush’s four-decades-in-the-making viral hit “Running Up That Hill (A Deal With God).”

Check out some of the best viral clips below – including everything from Britney Spears to Monty Python to The Benny Hill Show theme – as well as Stephen Colbert’s post-hearing monologue, which includes a bit that combines the chode-runner footage with the noise of Fred Flintstone revving up his (foot-powered) car.

All the good music versions of this have been done and I can never leave anything up with music but here Josh Hawley running away to chicken rap pic.twitter.com/MKJISXtRtl

All I can offer you is the finest Nina Simone. pic.twitter.com/azqXUlzbw3

My contribution to the cause: Josh Hawley + Del Shannon’s “Runaway”#hawlingass pic.twitter.com/oq4irDtFWJ