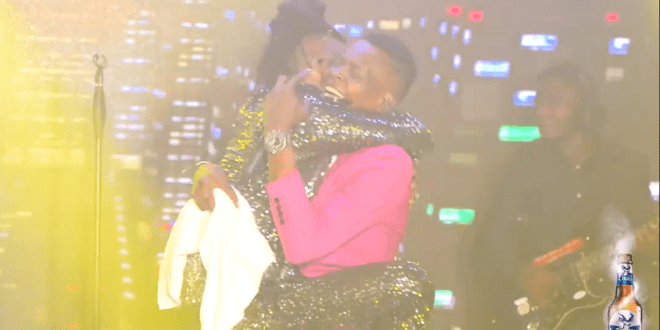 Doctor Jose Chameleone last night set the records clearer last night when he brought out his A-game at the Club Beatz at Home concert organized by Club Pilsener.

At the concert where the Leone Island boss came as the last act, he managed to put up a great performance that got the viewers mesmerized.

Chameleone opened his performance with his hit Wale Wale that sounded very good. Along the way Chameleone revealed his love for his fans and decided to surprise his fans with a surprise artiste who had not been on the poster and guess who it was; Weasel Manizo!

The two did their collabo; Bomboclat with a lot of energy and vibe that got the fans thrilled.

The performance cleared all the earlier records about Chameleone especially about his earlier concert on his birthday where some of the fans and analysts graded his performance as below the line.

He however made it clear that he is a master at what he does. Chameleone pulled it off great with a powerful combination together with Solid band and production by Fenon events.

Some analysts revealed that at his concert, Chameleone had probably not made enough rehearsals with the band and the preparations were not enough.

Among other performances at the Concert in its Season 2, Episode 2 include; Nutty Neithan, Naava Grey, Recho Rey, Chosen Blood.