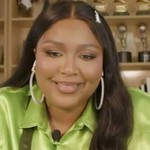 Lizzo Has Some Pretty NSFW Plans For Chris Evans: ‘Body Shots All On His Chest’

By now, most are aware of the fact that Lizzo drunkenly slid into Captain America actor Chris Evans’ DMs in April, and what blossomed was an accidental, beautiful digital friendship. Evans not only followed the “Truth Hurts” singer, but he admitted that he’s had his own share of buzzed DMs, setting off a barrage of coverage of their burgeoning friendship.

Well, now Lizzo is ready to take things to the next level. In a chat with SiriusXM’s Andy Cohen on Friday (Aug. 13) to promote her new single with Cardi B, “Rumors,” Lizzo said the two now have plans to meet up. OK, they don’t actually have plans, but she revealed that Evans promised to come to one of her shows.

“And I was like, ‘OK, shots on me,'” the singer told Cohen. “And he said, ‘No, shots on me.’ So here’s my scenario: He’s naked in the green room. And he has body shots all on his chest. And I walk in and I slowly just suck them off. OK. Sorry. Next question.”