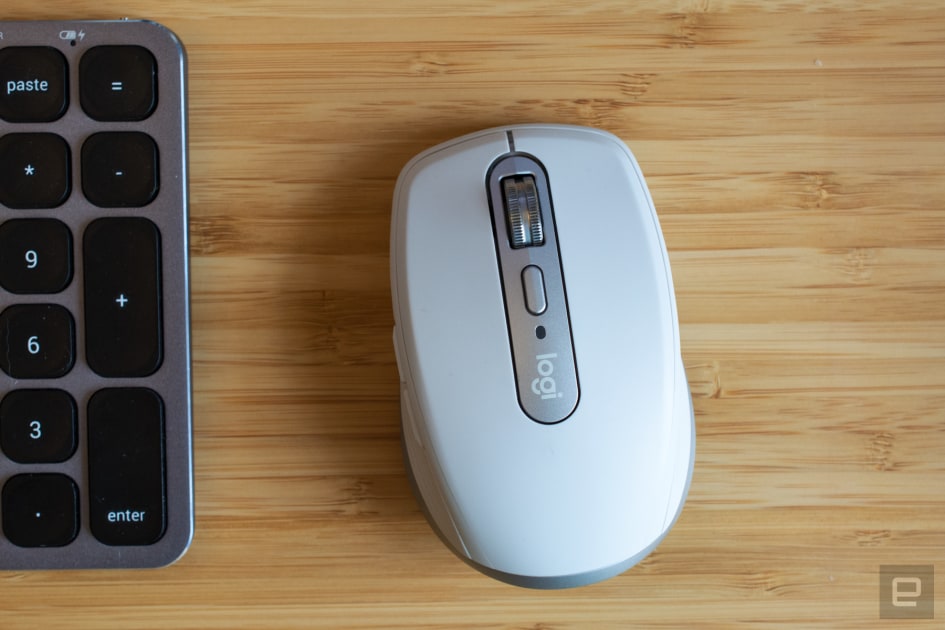 As far as design goes, the MX Anywhere 3 is almost exactly the same size as the Anywhere 2s but it has new silicone side grips and a slightly higher bump on its back that helps it fit into your palm a bit more easily. As someone who’s used to a larger mouse like the MX Master 2s, the Anywhere 3 felt small at first. However, it didn’t take long for my hand to adjust and make good use of those side buttons — not only during video chats, but also while side-scrolling. You can side-scroll with the mouse by pressing one side button and moving the MagSpeed wheel at the same time. It’s much less cumbersome than it sounds and I actually prefer it to the side wheel that adorns the MX Master 2s and its successor.

The new metal MagSpeed wheel on this mouse is essentially a smaller version of the one on the MX Master 3. It brings electromagnetic scrolling to the Anywhere 3, which is more precise and faster than the previous scrolling mechanism on the Anywhere 2s. The new mouse also has 4000 DPI Darkfield technology which helps it track on any material, even glass, and the wheel has middle-click functionality that you can customize in Logitech Options.

You can also customize scroll force in Logitech’s software, which will increase or decrease the number of lines you feel while scrolling in ratchet mode. By default, the top button switches between ratchet and hyperfast scrolling mode, but as with most buttons on MX devices, you can change the action assigned to that button in Options.

All of these features let you customize the way the Anywhere 3 feels as you’re using it, and that’s a good thing on a mouse that you’re supposed to use, well, anywhere. In the couple days I’ve spent with the Anywhere 3, I’ve used it at my desk as well as on my couch, on my kitchen countertops and briefly on a glass side table in my living room and it’s worked well in all of those environments. I also haven’t charged it once since I took it out of the box thanks to the mouse’s 70-day battery life. It charges via USB-C, too, which is a solid perk for those of us sick of seeing old microUSB ports on new devices.

The Logitech MX Anywhere 3 comes in a universal version, compatible with most operating systems including Chrome OS and Linux, and a version optimized for macOS. The former works via Bluetooth or with an included unifying USB receiver while the latter is Bluetooth-only. Both cost $79 and are available for pre-order today on Logitech’s website.