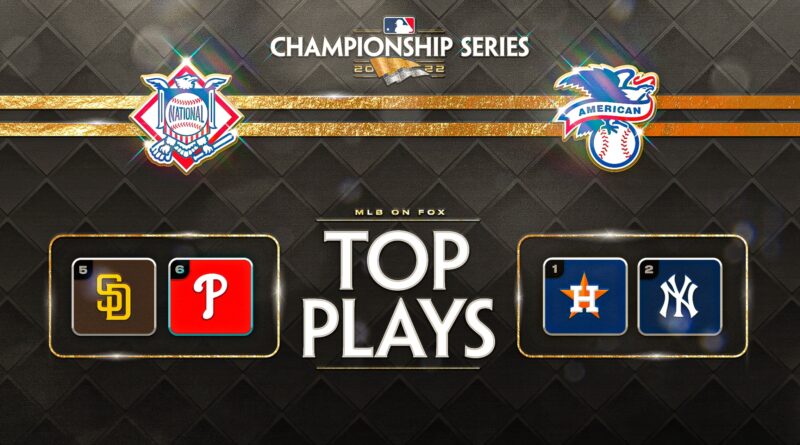 The NLCS continued on Wednesday, with the Padres evening the series at 1-1 with an 8-5 win over the Phillies, while the Astros took Game 1 oof the ALCS, defeating the Yankees 4-2.

Here are the top plays from Yankees-Astros:

Bader does it again

After hitting three home runs in the ALDS, Harrison Bader got the Yankees on the board first in the ALCS with a home run off Justin Verlander to take a 1-0 lead in the second inning.

After the Yankees took the lead in the top of the second, the Astros evened it up when Martin Maldonado hit an RBI double.

Verlander was cooking after giving up the home run to Bader in the second. He recorded his sixth strikeout of the game in the fourth inning when he struck out Isaiah Kinder-Falefa. It was also Verlander’s 215th career postseason strikeout, giving him the record for the most in postseason history.

The Astros were able to load up the bases in the fifth inning as they got Jameson Taillon out of the game. Following an Alex Bregman walk, Clarke Schmidt got Kyle Tucker to ground into an inning-ending double play to get out of the jam.

Yuli Gurriel broke the 1-1 tie in the first at-bat of the bottom of the sixth inning, hitting the inside slider into the Crawford Boxes to give the Astros a 2-1 lead.

And another home run for the ‘Stros

Two batters after Yuli Gurriel gave them the lead, Chas McCormick went the opposite way for a home run to extend the Astros’ lead to 3-1 and end Schmidt’s day.

Rookie Jeremy Peña continued his postseason heroics in the seventh when he hit a solo home run himself to extend the Astros’ lead to 4-1.

Anthony Rizzo made it interesting in the eighth inning when he hit a solo home run to cut the Astros’ lead to 4-2.

Astros closer Ryan Pressley entered the game with two outs but with two Yankees runners on base in the eighth inning. He got out of the jam by striking out Matt Carpenter and struck out Bader and Isaiah Kiner-Falefa to open the ninth inning.

Finally, he got Jose Trevino to end the game and give Houston a win in Game 1.

Here are the top plays from Phillies-Padres:

Blake Snell got some early support from his defense in the top of the first.

After singles from Bryce Harper and Nick Castellanos in the top of the second, an Alec Bohm single scored Harper to give Philly a 1-0 lead.

After Snell struck out Jean Segura, a Matt Vierling fly ball got caught in the sun, causing Juan Soto to let it drop. Castellanos scored to put Philly up 2-0.

A rough start to the day

Another single — this time from Edmundo Sosa — scored Bohm, giving the Phillies a 3-0 lead in the top of the second.

In Philly’s next at-bat, Kyle Schwarber grounded out to first, but it was enough to score Vierling, creating a 4-0 lead for PHI.

Two homers are better than one

After a hellish top of the second for the Padres, San Diego bit back, courtesy of back-to-back dingers from Brandon Drury and Josh Bell.

Little brother Aaron Nola got the best of big brother Austin Nola in this first-ever battle-of-the-brothers.

Manny Machado was upset over a call by the home plate umpire during his at-bat in the third inning, which resulted in a strikeout. Earlier in the at-bat, Machado nearly hit a solo home run but the ball drifted foul

Machado’s foul ball was so close to taking out MLB on FOX analyst John Smoltz’s coffee.

After his little brother got the best of him in his first at-bat, Austin Nola got a hit off Aaron Nola in their second matchup. It ended up being a big one, too. Nola’s single to right field scored Ha-Seong Kim all the way from first to cut the Phillies’ lead to 4-3.

The moment left Father Nola in a tough spot.

The Padres climbed back from a 4-0 hole to tie the game in the fifth inning when Soto doubled down the right-field line to score Austin Nola from third. Aaron Nola’s day ended a batter later after he struck out Machado for a second time.

Drury stepped up in the clutch again for San Diego, hitting a single to center to score two runners with the bases loaded. The base hit gave the Padres a 6-4 lead in the fifth inning.

After they hit back-to-back home runs in the second inning, Drury and Bell hit back-to-back RBI singles in the fifth. Following Drury’s two-run knock that gave the Padres the lead, Bell extended it with a hit to right.

The Padres All-Star third baseman gave them an insurance run in the seventh, hitting a solo shot well over 400 feet to extend San Diego’s lead to 8-4.

Phils get one back

Rhys Hoskins opened up the eighth inning by hitting a home run on the first pitch he saw from Padres reliever Robert Suarez, who hadn’t allowed a run all season at Petco Park. The homer cut the Padres’ lead to 8-5 and was the Phillies’ first run since they lead 4-0.

Padres closer Josh Hader came in for the ninth and struck out the Phillies in order to even the series at 1-1.