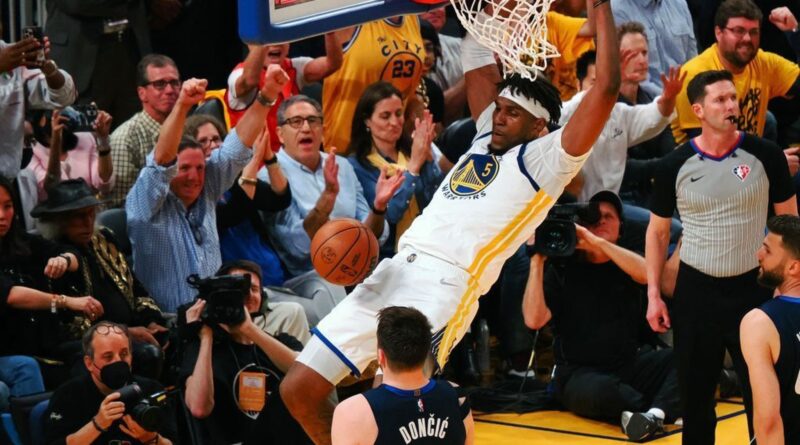 SAN FRANCISCO — The Golden State Warriors have a history of big third quarters. No one exactly knows why.

Maybe Warriors coach Steve Kerr gives the best halftime speech around. Maybe it takes them 24 minutes to fully assess how their opponent is approaching the game. Maybe they need those 24 minutes to wake up. But whatever it is, they come out after halftime, and more often than not, roll.

That surely was the case on Friday night, when the Warriors came back from a 19-point deficit to beat the Dallas Mavericks 126-117 in Game 2 of the Western Conference finals. The Warriors have a 2-0 advantage in the series.

The first two quarters of the game were owned by the Mavericks. They hit 15 3-pointers in the first half, setting a franchise record for 3s made in a playoff half. Luka Doncic and Jalen Brunson became the second pair of starting guards to each score 20 points in the first half of a playoff game in the past 25 seasons.

“I told them that if we developed some poise in the second half, the game would come to us,” Kerr said. “But I thought we were so scattered in the first half. Maybe emotionally more so than anything. Dallas came out and just punched us. We felt confident that if we [got poised], they wouldn’t make 15 3s in the second half.”

Entering Friday’s game, the Warriors were plus-11 in the third quarter this postseason. In Game 2, they were plus-12.

Golden State scored more points in the paint in the third (18) than the Mavericks had total points (13). Dallas’ 13 points in the third are its fewest in a quarter this postseason, and the Warriors limited them to just two 3-pointers that quarter.

“You didn’t want to overreact, but also we got a lot better on the ball, just trying to keep bodies on Luka,” Stephen Curry said. “Close out to the shooters that we know are hot, and then rebound the ball so that that’s our best offense.”

The Warriors dominated throughout the second half collectively. Otto Porter Jr. hit a 3-pointer in the fourth to give the Warriors their first lead. Jordan Poole attacked the rim time and time again to help swing the momentum. Curry scored 10 of his 32 in the fourth, including the dagger shot that sealed the deal for Golden State.

But it was Kevon Looney who stole the show. At one point, “MVP” chants rained down as Looney attempted free throws — something he admitted was “nerve-wracking.”

On defense, Looney held the Mavericks to 1-of-11 shooting from the field as the primary defender, including holding Doncic to 0-of-3. He also grabbed 12 rebounds.

Looney is accustomed to being switched onto guards like Doncic. During the Warriors’ dynastic runs, he was switched onto James Harden when Golden State faced Houston multiple times during the postseason.

“I take kind of the same approach,” Looney said. “I’m just a little bit more battle-tested. That was my first time playing on a big stage like this. I don’t know if even my teammates had the most faith in me, but they put me out there and I handled it pretty well.

Looney’s defense — and particularly his rebounding — has been a point of emphasis for the Warriors all season. In Game 6 of the Western Conference semifinals, he grabbed 22 rebounds.

But against the Mavericks, his offense took center stage. Looney scored a career-high 21 points in Game 2. Not only was this the first time he scored 20 points since his freshman year at UCLA in 2015, but he became the first Warriors center to have a 20 and 10 playoff game since the 1970s.

Looney didn’t work in the dunker spot too much during the regular season, but it’s something he’s comfortable with. Against the Mavericks, who lack a true big rim protector or shot-blocker, the Warriors have been able to rely on drop-off passes to Looney. And with so much defensive attention being paid to Curry, Poole and Klay Thompson, the paint has remained open for Looney.

“Playing center for the Warriors, it’s a different type of job from other teams,” Looney said. “A lot of the scoring and stuff, we don’t really need us to do. It’s a lot of screen setting and a lot of playmaking and doing different things. For me to have a game like that is cool.”

Eleven of Looney’s points came in the third quarter, as the Warriors made their ferocious push.

At one point in the second quarter, the Warriors trailed by 19, making Friday their third-largest playoff comeback in the past 25 years.

Golden State finally took its first lead 18 seconds into the fourth quarter, when Porter hit a 3-pointer from the right corner. The Warriors outscored the Mavericks 68-45 in the second half.

“It’s just the supreme confidence in what we do,” Curry said. “You don’t really know what they are talking about in the huddle and you don’t really feel what’s going through their mind. It’s just you have imposed your will. Like for us, the experience and just the chemistry.

“We have that attitude and that spirit where we feel like we are never out of it. I think only one game in this playoff run so far that we’ve been severely outmatched from start to finish. But that belief then turns into execution in the game, and you can feel the momentum. It’s more just focused on what we do, and when you have those opportunities to stick the dagger, or come up with three stops in a row, those are the times where you feel that good energy going our way.”