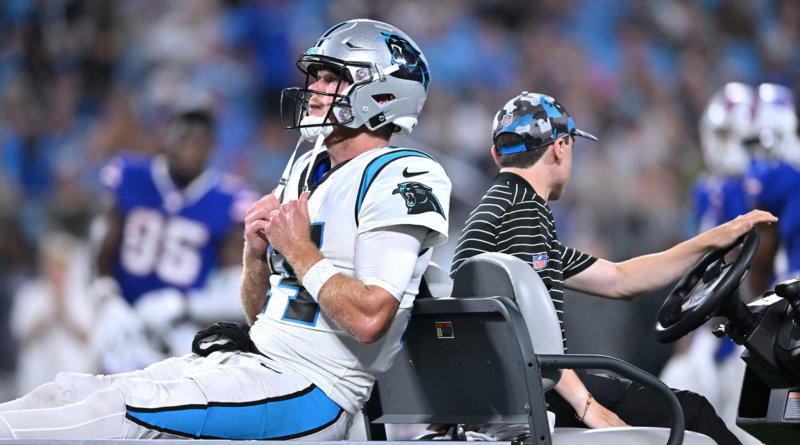 The Carolina Panthers will be without their backup quarterback for some time.

Sam Darnold will miss “at least” four weeks due to a high ankle sprain he suffered in Friday’s preseason win over the Bills, Panthers coach Matt Rhule said Monday. It was initially reported that Darnold would miss four-to-six weeks following the injury.

Darnold’s left ankle twisted awkwardly after Bills defensive tackle C.J. Brewer landed on him as the quarterback was releasing the ball. Several Panthers players ran over to him as he was helped onto the cart. Bills quarterback Josh Allen, a good friend of Darnold’s, also ran onto the field to offer encouragement.

The Panthers will enter the season with Baker Mayfield as their starter and PJ Walker as his backup.

The Panthers also lost their starting kicker, Zane Gonzalez, to a groin injury against the Bills. After telling reporters Saturday he expected Gonzalez to miss a significant amount of time, Rhule said Monday that he’s unsure if the kicker will need surgery. There is a possibility it could be season-ending, and he will see a specialist to determine the degree of injury.

As a result of Gonzalez’s injury, the Panthers hosted five kickers for a workout on Monday, including Eddy Pineiro.

Rhule wouldn’t specify what Gonzalez did to his groin while practicing kicks into the net on the sideline.

Gonzalez finished last season 20 of 22 on field goals after joining the Panthers in Week 2 of the regular season and making 22 of 23 extra points. The Panthers re-signed Gonzalez to a two-year, $4.5 million contract after he made his final 17 field goals last season.

Darnold isn’t the only Panthers quarterback to go down with an injury this preseason. A week earlier, rookie Matt Corral, the team’s third-round draft pick, suffered a season-ending injury when he tore a ligament in his foot in a 20-10 loss to the New England Patriots.

Get more from Carolina Panthers Follow your favorites to get information about games, news and more.