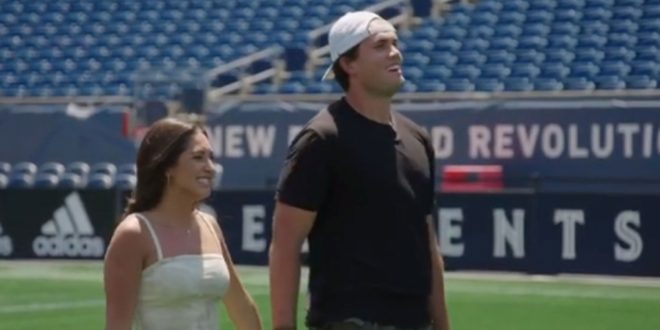 Hunter Henry thought it was going to be a girl.

The Patriots tight end had a pretty epic gender reveal on the field at Gillette Stadium this week — just three months after he signed a three-year, $37.5 million deal (including $25 million guaranteed) in March during the team’s free agency spending spree.

In a video shared by Henry, the 26-year-old says he thinks it’s a girl, while his wife Parker was feeling boy.

As the expectant couple made their way across the field hand-in-hand, the scoreboard read “He or she?”

Hunter and Parker held hands as someone in the distance counted down, “3, 2, 1!” The scoreboard lit up in blue with the words, “It’s a boy!”

“I knew it! I knew it deep down,” Parker yelled as the couple celebrated and hugged.

Hunter and Parker announced they were expecting on June 21 in coordinated instagram posts.

“I’ve got a new title off the field… Coming December 2021,” he wrote alongside photos of the couple that included sonogram images.

Parker acknowledged the couple’s move from Los Angeles to Boston when Hunter joined the Patriots in her post announcing her pregnancy.

“Little did we know THREE of us were moving to Boston,” she captioned more photos of the couple and their sonogram images. She added the baby’s presumed birth day, “12.27.21.”

It’s been a week of celebration for the soon-to-be Henry trio.

Hunter and Parker celebrated their third anniversary on Wednesday. He shared a photo from the couple’s wedding day to Instagram with a tribute to Parker in his caption.

“Happy 3 year anniversary to my beautiful bride! Can’t wait to start this new journey with you. I love you forever!,” he wrote.

Hunter is ending June in better spirits after he had an injury scare earlier this month.

On June 10, Hunter was forced to exit a Patriots practice when he suffered an apparent lower left leg injury during a 7-on-7 drill, according to NFL Network’s Michael Giardi. The injury turned out not to be as serious and Hunter received treatment from the Pats medical staff. He spent the rest of the practice on the sideline that day.