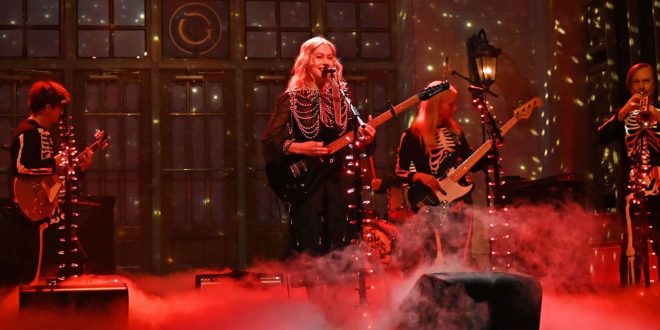 When Phoebe Bridgers smashed her guitar to smithereens during her performance of “I Know the End” on Saturday Night Live in February, there was no way she could’ve known that the cultural impact of the instrument would stretch far beyond the fake amp it struck that night. On Sunday (April 11), the highly-discussed Danelectro Dano ’56 electric guitar sold for an incredible $101,500 at the LGBTQ+ advocacy organization GLAAD’s auction in support of the GLAAD Media Awards.

“Phoebe Bridgers’ unforgettable SNL guitar smash has now gone from a much buzzed about performance and morphed into an important moment of giving back to the LGBTQ community,” said Anthony Ramos, GLAAD’s head of talent, said in a statement per Billboard. “Phoebe is such a visible, out powerhouse in the music industry and we knew that the item was special, but we were so pleasantly surprised to see such a large amount of money raised that will go directly into our work to support and uplift LGBTQ people. Thank you, Phoebe!”

In response to the impressive price point of the guitar, the 26-year-old singer-songwriter only had one thing to say: “Uh.”

In the aftermath of her SNL debut, Bridgers’s rock-and-roll move became a heavily contested topic on social media, with fans and fellow rockers including Crosby, Stills, & Nash’s David Crosby and southern rock musician Jason Isbell chiming in with their own views of the stunt. According to Bridgers, she told Danelectro about her plan to break the guitar at the end of her performance. “They wished me luck,” she said.

Crosby and Bridgers descended into a Twitter argument that resulted in him saying he preferred “people who can actually write songs” and her calling him a “whiny bitch.” When the guitar first went up for auction, she threw another jab Crosby’s way by letting him know it “could finally be [his].”

“Got some really great feedback from my performance!” She wrote in an Instagram post in response to the outcry. “Next time I’ll just burn it and it will be more expensive.”