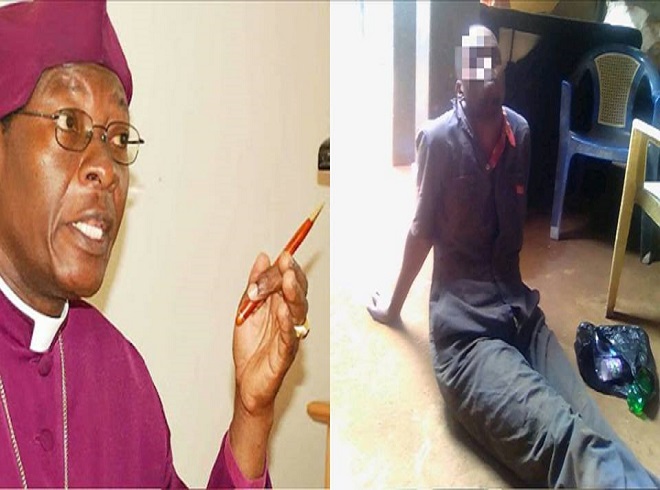 Kaddu who was dressed in bark cloth and had a cultural stick was only  barred by a barricade that got him falling and this is where security personnel captured him from.

Police has come out to give full details about the incident. Below is the police statement.

We have in custody a man identified as Kaddu Herbert aged 35 years a resident of Makay Zone Rubaga who allegedly forced him self into Namirembe Cathedral.

The suspect that came cruising in a super custom vehicle registration number UAS 329T, holding a traditional stick and a back cloth ran towards the alter while the Bishop of Namirembe Diocese Rt. Rev. Wilberforce Luwalira was presiding over an Easter Service.

He is now being detained at Namirembe Police Post on charges of threatening violence under SD REF. 03/01/04/2018.

We are doing all it takes to find out his motives. However sources allege insanity and hence the same is pending for a medical examination to determine his mental sanity. If proven insane is to be referred to a mental rehabilitation centre and if not not is to be charged criminally.