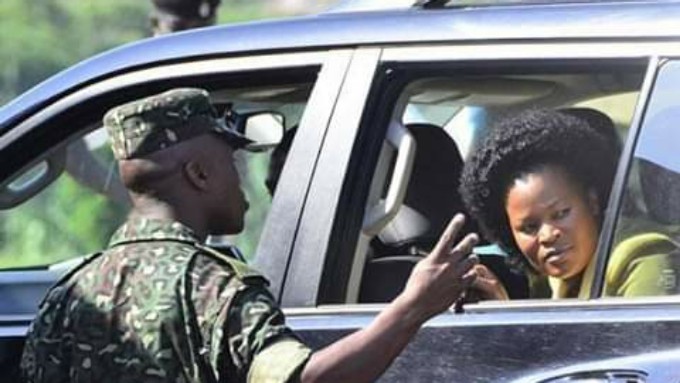 Police has come out to give a full account on the failed Attack on MP and Minister Aida Nantaba.

Bellow is the official statement from Police Spokesperson Fred Enanga.

The police at Nagalama are investigating circumstances under which two men dressed in black leather suits and riding a silver grey Suzuki sports motorcycle Reg No.UDL 822A, allegedly trailed, The Hon. Aida Nantaba Erios, The Hon. Minister of State for ICT and Woman Member of Parliament Kayunga District, in a threatening manner over a distance of 40 kms, from Sezibwa bridge up to Nagalama trading centre. It is alleged that two riders today 24th.March 2019 at around 11:00am rode past The Hon. Minsters official vehicle after, made a U-turn, drove back and pulled alongside the roadside market after Sezibwa bridge. One of them came to the stall where she was buying fruits and pretended to seek for the direction to Kabimbiri trading centre . His suspicious conduct prompted her bodyguard to respond and they drove off.

The Hon. Minister upon realizing that she was being trailed, branched and alerted the police at Nagalama, about the suspicious conduct of the riders.

The two suspicious riders, upon noticing that the Hon. minister had branched and alerted the police at Nagalama , diverted and attempted to escape in the direction of Kimenyede – Mayangayanga Road .

The response teams at Nagalama, pursued them, and after a long chase forced them to abandon their sports motorcycle at Nagojje trading centre, several shots were fired in their direction, to cause them to surrender, but all in vain. In the process, Sebbulime Ronald a resident of Nakabugo Village, Nakabugo Parish, Pakiso Sub County, and Busiro County in Wakiso District was shot dead during the pursuit. The police is still searching the area with canine dogs for the second suspect, who is feared armed and dangerous.

We want to inform the public that The Hon. Minister, despite the scare is very safe and was not attacked at any stage as alleged in the media. Due to the signature technique of attacks from assailants perched on the back of moving motorcycles, the police is taking keen interest, in this investigation, to establish the motive of the suspects. The mobile phone to the deceased, the motorcycle and identification documents recovered are essential leads in our investigation.