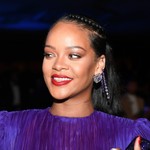 The film centers on stand-up comedian Henry (Driver) and opera singer Ann (Cotillard), who marry and then welcome a child.

As The Hollywood Reporter’s chief film critic David Rooney described it in his review: “They marry and she soon becomes pregnant, prompting visions of blood-drenched childbirth and a baby with a garish clown face. That child is Annette, represented by a marvelous Pinocchio-like wooden puppet, its features both innocent and inscrutable yet unexpectedly expressive.”

Annette goes on to become a famous singer, and Rihanna would have played a fellow performer threatened by the young star.

“When Baby Annette becomes famous, there was a duet between the puppet and Rihanna,” Carax told USA Today. “But then Rihanna feels upstaged by this baby.”

Early reports of the film noted Rihanna was attached to the project, but her rep later said she was no longer part of the cast. Instead of replacing Rihanna, the scene was cut from the film, Carax said.

Annette is portrayed by a puppet in the film until the final scene, where Devyn McDowell takes on the role and performs a song alongside Driver.

Annette, which hit theaters Friday, premiered earlier this year at the Cannes Film Festival, where Carax won the best director award, and will be available for streaming on Amazon later this month.