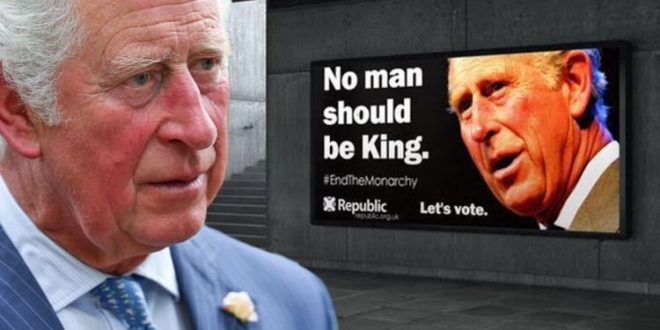 Royal backlash: Billboards against Prince Charles to be erected across UK

When Queen Elizabeth II dies or steps down from the throne, her eldest son, Prince Charles, will take over and become King. However, the Republic campaign group has demanded the monarchy ends following the death of the Queen.

Now, the group has announced the first 12 billboards calling for the end of the monarchy will be placed in several cities up and down the country.

One of the billboards will feature an image of Prince Charles – which was tweeted by the group – and reads: “No man should be King.”

The billboard also uses the hashtag #EndTheMonarchy and calls for people to vote on the future of the Royal Family.

Tweeting the picture, the group said: “The first 12 billboards will go up in a couple of weeks.

Billboards against Prince Charles to be erected (Image: Republic/Getty)

Another mock-up poster calling for the end of the Monarchy (Image: Republic)

“They’ll be in Aberdeen, Paisley and Glasgow, Newcastle, Leeds, Liverpool, the Potteries, Birmingham and Portsmouth.

“We haven’t forgotten Wales, which will be the priority for the next lot we order.”

In their crowdfunding campaign, the group claim Charles’ succession as King will be a “major turning point in the monarchy’s history” and will help grow “Britain’s republican movement”.

The campaign to #EndTheMonarchy – which has received more than £13,000 so far – reads: “We want the country to know there is a positive, exciting, democratic alternative to sitting back and letting Charles become our head of state.

“And we want the country talking about why the monarchy is bad for Britain, why it’s time to call time on the royals.”

They continued: “As the Queen’s reign draws to an end, it is time to demand a say in who should be our head of state.”

The group also claimed King Charles may “inherit the throne, but he won’t inherit the respect and deference enjoyed” by Queen Elizabeth II.

“It’s time to end the monarchy.”

A third mock-up shared by the campaign group includes a picture of Prince Andrew, which says: “Wanted. A democratic alternative to the monarchy.”

Over recent years, the Royal Family has been subjected to criticism over Prince Andrew’s former ties with convicted paedophile Jeffrey Epstein.

The Duke and Duchess of Sussex claimed there were conversations about the colour of Archie’s skin before he was born.

Last month, a ballot carried out of 6,000 people across France, Germany, Italy and Spain found Meghan was more popular than Charles at 39 percent and 32 percent respectively.

More than half of those surveyed (56 percent) would prefer Prince William to be the next British Monarch.

Charles only received 18 percent of the votes.

The research was conducted by Redfield and Wilton Strategies for Euronews.

The results were released as part of the media company’s new ‘Feel Connected to Europe’ campaign.