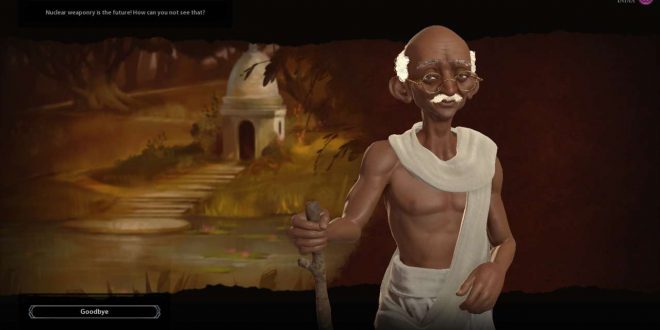 In all of gaming lore, there is no tale as whimsical as that of Nuclear Gandhi, the story that tells of how a programming quirk turned the famously non-violent Indian leader into an aggressive warmonger with a penchant for nukes. While there have been attempts to debunk the story over the years, Sid Meier has finally come out and said that Nuclear Gandhi is, in fact, a figment of our collective imaginations.

The original story, for those who are unfamiliar, claims that in the original Civilization, Gandhi was given the lowest possible aggression rating, as befits a figure of his reputation. However the bug occurred when a player adopted democracy, which would reduce aggression automatically by two. With Gandhi already at an aggression rating of one and the program unable to handle negative numbers, it would cycle back around to give the Indian leader an aggression rating of 255, the highest in the game. From there, Gandhi would become a fearsome monster as soon as he had possession of nukes.

In subsequent games, the story claims, the programmers gave Gandhi a higher aggression as an easter egg, calling back to the original story. The only problem is–none of it is true.

Sid Meier has written in his memoir, as quoted by Bloomberg, that there was no such bug in the original Civilization, and that the story itself is based on an incorrect premise–though he does enjoy the joke. “It’s one of those mysteries that it’s almost fun to keep mysterious,” Meier said.

This attitude was mirrored in a letter sent to Chris Bratt, a journalist who investigated the myth of Nuclear Gandhi for People Make Games last year. “In some ways, it may be best not to know,” Meier’s letter to Bratt read. “Given the limited technology of the time, the original Civ was a game that took place mainly in the player’s imagination… I’d be reluctant to limit what that player can imagine by introducing too many of my thoughts,” he said.

Now, the cat’s out of the bag on the original story–but if you would rather believe that Nuclear Gandhi actually happened, I’m sure Sid Meier wouldn’t mind.