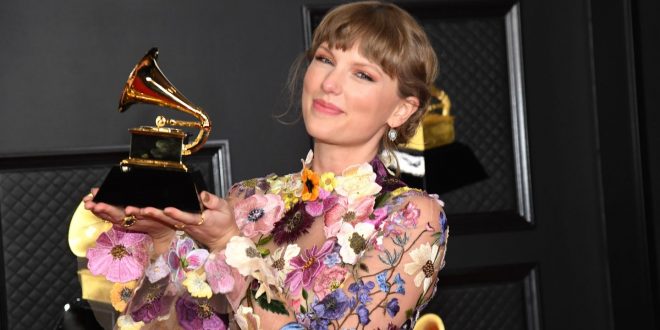 Taylor Swift Thanks The Real-Life James, Inez, And Betty In Album Of The Year Speech

A few hours ago, she took the Grammys to the woods with a hybrid Folklore/Evermore medley performance. And as the night wound down to its final (and top) prizes, Taylor Swift was rewarded for such a journey with a golden gramophone.

Yes, the Recording Academy awarded Folklore, Swift’s surprise return-to-roots quarantine album, the Album of the Year trophy. The folk album’s win punctuated one of the most unusual years in the Recording Academy’s history, and Swift mentioned the origins of Folklore‘s 16 tracks in her acceptance speech. “I had the best time writing songs with you in quarantine,” she said, thanking her partner, Joe Alwyn.

She led by thanking “all of my collaborators,” including recording engineers Jonathan Low and Laura Sisk and co-producer Jack Antonoff, who joined her onstage to accept, as well as Justin Vernon — who sings on “Exile.” “I’m so excited to meet you someday,” she said, nodding to the album’s cohesion despite being constructed of remotely recorded parts.

Swift also thanked one of her album’s co-writers — Alwyn — by name and said he’s “the first person I play every single song I write.” (Alwyn is credited on “Exile” as well as “Betty.”) Notably, she also thanked the real-life namesakes of three characters on the album: James, Inez, and Betty, daughters of her pals Ryan Reynolds and Blake Lively. Reynolds and Lively are, Swift said, “the second and third people I play every new song that I write [for].”

She ended by thanking her fans for going on the adventure with her: “You guys met us in this imaginary world that we created, and we can’t tell you how honored we are forever.”

Before Swift spoke, Dessner offered his thanks and called her “one of the greatest living songwriters,” likewise shouting out the crew of collaborators as well as his family, including twin brother, his bandmate in The National and Folklore orchestrator, Bryce.