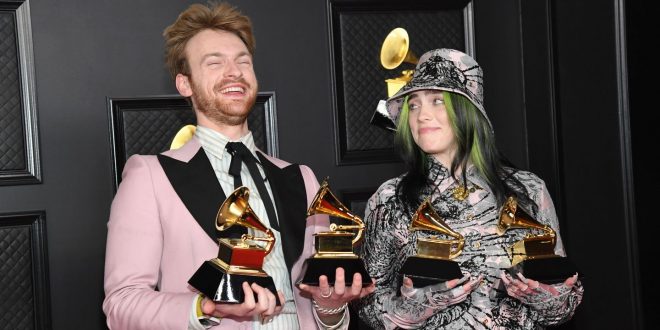 Billie Eilish Won Record Of The Year, But She Was Rooting For Megan Thee Stallion

Billie Eilish was flattered to win a top honor at the Grammys this year, but she wasn’t expecting it.

The nominees for Record of the Year usually make for stiff competition, and the lineup at the 63rd annual Grammy Awards on Sunday (March 14) was no exception, with recordings by Dua Lipa, Meg Thee Stallion, and Beyoncé receiving nods. Ultimately, the award went to alt-pop ingenue Billie Eilish and her brother-collaborator Finneas for “Everything I Wanted,” a pensive 2020 single they co-wrote. (The duo also performed an enchanting rendition of the song earlier in the show.)

When the Beatles legend Ringo Starr announced their win, Eilish and Finneas were visibly surprised. “This is embarrassing,” a disbelieving Eilish said into the mic before segueing into a speech about one of her competitors: “rap Beyoncé” and Best New Artist winner Megan Thee Stallion, who was up for the same award for “Savage,” her chart-topping single featuring Queen Bey herself.

“You deserve this. You had a year that I think is untoppable,” Eilish said, referring to “Savage” and “WAP,” Meg’s unforgettable collab with Cardi B. “Genuinely, this [award] goes to her. Can we just cheer for Megan Thee Stallion?”

At 19 years old, Eilish already has six Grammy wins under her belt, including the 2021 award for Best Song Written for Visual Media (for the James Bond theme “No Time to Die”). She famously swept the big four categories at the 2020 Grammys, making her the youngest artist in the show’s history to achieve that feat.

Find a full list of the night’s winners here.