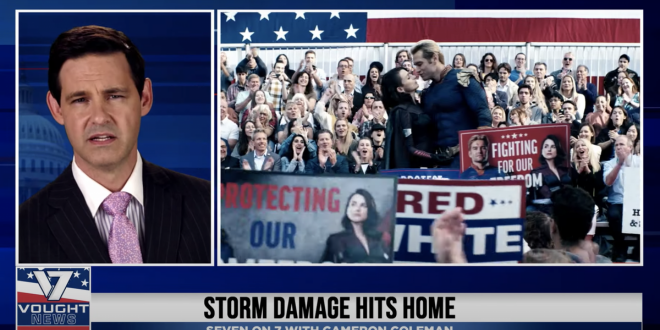 Dying to know what’s been going out with those pesky Boys? Why read a recap when you can check out good ol’ fashioned American propaganda! The Boys has launched a new digital series designed to bridge the gap between the superhero series’ seasons two and three, taking the form of a news show starring some guy with a very punchable face.

Amazon Prime Video has released the first episode of “Seven on 7 on VNN [Vought News Network],” a seven-episode digital series where VNN anchor Cameron Coleman (Matthew Edison) gives the latest news a “pro-Super” spin. The show takes place in the world of The Boys but takes its cues from Fox News, One America News, and other conservative outlets that have decided it’s cool to spread disinformation so long as they garner views and advertising deals from the network’s only remaining sponsor, “Our Sheet.”

New episodes of “Seven on 7″ will be released on the seventh day of every month, with seven episodes planned in total (I’m sensing a theme here). In a statement, showrunner Eric Kripke said the content in the digital news show will help set things up for season three, which the showrunner previously said would largely focus on America’s growing political divide. As part of this effort, Edison will reprise his role as Cameron Coleman in season three.

“Since the very start of The Boys, we’ve seen Vought’s propaganda arm—I mean, news channel,” Kripke said. “We’ll be digging deeper into those fair and balanced patriots next season, so as a teaser, we’re introducing ‘Seven on 7’ with VNN’s biggest star Cameron Coleman. The episodes are in world canon, serving up brand new information that bridges the story gap between Seasons 2 and 3. So enjoy the hot takes and catheter commercials, just like your parents do.”

Season three of The Boys is currently being filmed and no expected release date has been announced. It sees the return of key Supers and Boys, along with the debut of Supernatural’s Jensen Ackles as Soldier Boy.