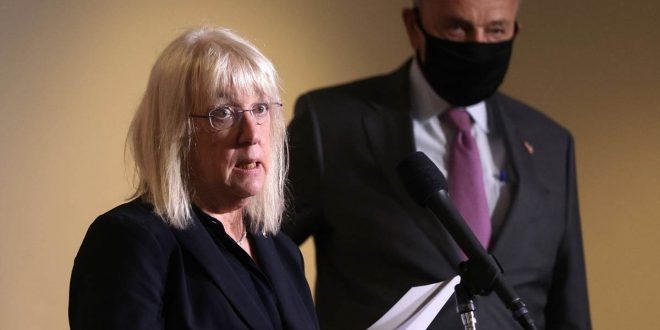 ‘The country wants us to act’: Sen. Patty Murray says Biden’s family plan will help everyone

WASHINGTON — When Sen. Patty Murray, D-Wash., first arrived in the Senate in 1993, the first piece of legislation she voted on was the Family and Medical Leave Act.

It was first federally protected maternity and family leave program — although it was unpaid — and it opened the door for women to both work and have children without fear of losing their jobs.

Twenty-eight years later, the Washington senator could help usher through Congress the most expansive federal family support program in history and could be as transformative as the creation of the public school system.

“I’m just so excited about the opportunity for the first time really in my memory that we are really talking about what do we do for families,” Sen. Murray told NBC News on Thursday, the day after Biden’s first joint address to Congress.

“I’ve been talking about this for a very long time. In fact, when I first ran for the Senate … I had people saying to me, ‘What are you going to do with the kids?” said Murray, a former pre-school teacher. “I guarantee they never said that to any man running for the Senate, but they said it to me.”

The Senate has come a long way since Murray was first elected in 1992, dubbed the “Year of the Woman” because the number of women who won nearly doubled to seven. She was the first woman to serve with children and she understand the child care challenges. “I was living it daily,” she said. “But no one else was living it daily.”

Now there are 24 women who serve in the Senate, including Sen. Tammy Duckworth, D-Ill., who was the first senator to have a baby while serving and the first senator to take parental leave. “Slowly but surely as more women have gotten elected and who are echoing my voice down the dais here to speak about the issue,” she said, pointing to the seats in the committee room.

But the price tag is high for Biden’s plan. The American Families Plan in its entirety is sketched out to cost about $1.8 trillion and is expected to be paid for by raising taxes on families making more than $400,000 per year and taxing capital gains as income.

He said it would give politicians “even more power to micromanage American families and build a country liberals want instead of the future Americans want.”

Murray’s response: “Give me a break.”

“If we want our economy to succeed for everyone, we have to be part of the help for everyone to be able to do that,” she said.

But the road to passage will be difficult.

She said that Democrats will use the budget reconciliation process, which allows for the passage of budget-impacting legislation with a simple majority, if Republicans don’t come to the table.

Even if reconciliation is used, Democratic leaders would have to win the support of every single Democrat for 51 votes, also a challenge as Sen. Joe Manchin, D-W.Va., has said that he is concerned about the size of Biden’s plans.

“The country wants us to act,” she says.