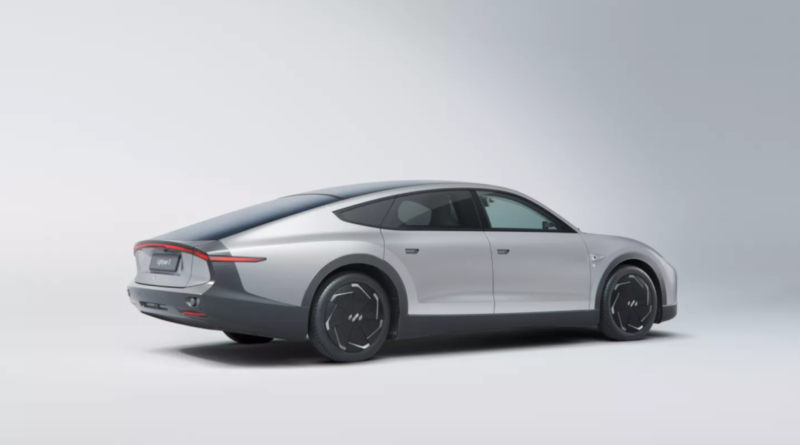 In other news, Our Next Energy reveals 240-Ah anode-free cell with high energy density, ABB E-mobility expands its manufacturing footprint in the US, and Volvo’s parent company Geely unveils 600 kW supercharging technology.

Lightyear has announced results of wind tunnel testing which has confirmed its long-range solar electric car Lightyear 0 to be the most aerodynamic production car in history. The Dutch company officially unveiled the model in June, billing it as the car with “more range, less battery”.  Covered in solar panels, the Lightyear 0, has a Worldwide Harmonized Light Vehicle Test Procedure (WLTP) range of 625 kilometers and consumption of 10.5 kWh per 100 kilometers.  However, the Dutch startup claims that a theoretical range of 695 kilometers could be achieved with a battery pack capacity of 60 kWh. “The optimized solar roof and holistic design mean that the car can drive for weeks, even months, without charging,” the company said. Now, Lightyear 0 has made what it is described as “automotive history” in groundbreaking wind tunnel tests. With a drag coefficient of 0.175, it outperformed Tesla Model 3’s 0.23, Mercedes-Benz EQS’ 0.20, as well as the diesel-electric hybrid Volkswagen XL1’s coefficient of 0.186. According to the company, Lightyear 0’s energy consumption, and therefore its efficiency, depends on three key elements: the aerodynamics, rolling resistance and heating system. “In fact, at highway speeds, aerodynamics account for around 60% of overall energy consumption. Most electric car drivers will have felt the sting of restricted range, especially at higher speeds,” Lightyear says in a blog post regarding the record. “A good (low) drag coefficient means a more economical car that consumes less energy and, as a result, can drive further on one charge. Our drag coefficient is a huge contributor to the overall efficiency that places Lightyear 0 as a market frontrunner,” it says.

Our Next Energy (ONE) has unveiled a new anode-free battery cell technology that can deliver up to 600 miles of driving range while reducing cell-level costs to $50 per kilowatt-hour. Last week, the Michigan-based startup unveiled a 240-Ah prismatic anode-free cell after a 12-month R&D effort. With a volumetric energy density of 1007 Wh/L, the anode-free cell is believed to be the highest energy density large-format cell ever produced. “Our prismatic anode-free cell is produced with approximately half of current cell manufacturing equipment for equivalent capacity, allowing us to sharply reduce scale-up cost,” said Mujeeb Ijaz, founder and CEO of ONE. The technology will enable the commercialization of ONE’s Gemini dual-chemistry battery pack architecture, which combines lithium-iron-phosphate (LFP) and anode-free chemistries into one battery pack, enabled by the company’s proprietary DC-DC converter. This allows each specialty chemistry to focus on different functions: LFP for daily driving, and anode-free to extend range for long distances. This combined system is expected to deliver more than 250,000 miles of lifetime service. The company’s goal is to launch the Gemini battery in 2026 with zero cobalt and 26% nickel or less, using manganese as the primary cathode material.

ABB E-Mobility is expanding its manufacturing footprint in the U.S. The company has announced that it will invest several million dollars in a new EV charger facility in Columbia, South Carolina. The new facility will be capable of producing up to 10,000 chargers per year, ranging from 20 kW to 180 kW in power, which are suited for public charging, school buses, and fleets. The new plant will allow the company to “respond more quickly to US market demand, make its supply chain more efficient and local, and shorten delivery times,” ABB says. It is expected to create 100 new jobs. The operation builds on ABB E-mobility’s existing US manufacturing operations, which produce transit bus chargers that range from 150 kW to 450 kW.

Geely has unveiled a 600 kW supercharging technology that it says can add 300 km of EV driving range in just five minutes. Presently, only the 01 EV from Geely’s electric-only brand Zeekr is able to charge at this speed by virtue of CATL’s latest Qilin ultra-long range battery with 1,000 km of range. The new technology has been developed by an affiliate company of Volvo parent Geely called Viridi E-mobility Technology. It is currently only available in China and is ready for mass production.

A team of students from the Eindhoven University of Technology in the Netherlands have designed a car that consumes more carbon than it emits while driving. The prototype car, called Zem, can capture 2 kilograms of CO₂ through a special filter at 20,000 travel miles per year. The filter through which the outside air flows is unique and the group of 35 students are in the process of applying for a patent for this innovation. “It is really still a proof-of-concept, but we can already see that we will be able to increase the capacity of the filter in the coming years. Capturing CO₂ is a prerequisite for compensating for emissions during production and recycling,” explains team manager Louise de Laat. The sporty all-electric car is made mostly from 3D-printed recycled plastics. It can currently drive 320 kilometers before the filter is full, and the team is thinking of a future where the full filter can be emptied easily via the charging station when the car is charging.

Shell plans to install over 10,00 EV chargers across India by 2030. Last week, the energy major launched its first EV chargers in India for the four-wheeler and two-wheeler segments in Bengaluru. India is the first market for Shell to launch chargers for two-wheelers. Shell will provide customized charging solutions at on-the-go locations such as its fuel stations, standalone EV hubs, home charging and destination locations. For on-the-go and standalone EV hubs, the company will deploy 100 kW and above DC fast chargers. Customers will be able to operate these chargers through the Shell Recharge India app, available on both Android and iOS operating systems.

Batteryloop will reuse batteries from Mercedes-Benz Energy electric vehicles to deliver stationary storage projects in Sweden. The start-up, part of Swedish recycling company Stena Metall Group, said it had received three orders for its BLESS III storage systems of 2.8 MW each. The first system will be installed in Karlshamn Kommun and will help stabilize the local power grid via peak shaving and frequency regulation services. The second system will be delivered to to Humlestaden, Ikano Bostad and Stena Fastigheters new sustainable district with 3,000 new residences. The storage system there will be used for frequency regulation services. Finally, Batteryloop will install an energy storage system from recycled vehicle batteries at the Stena Nordic Recycling Centre in Halmstad for the purpose of peak shaving and frequency regulation. The Swedish start-up signed a framework agreement with Mercedes-Benz Energy earlier this year giving it access to 40 MWh of used battery storage systems.