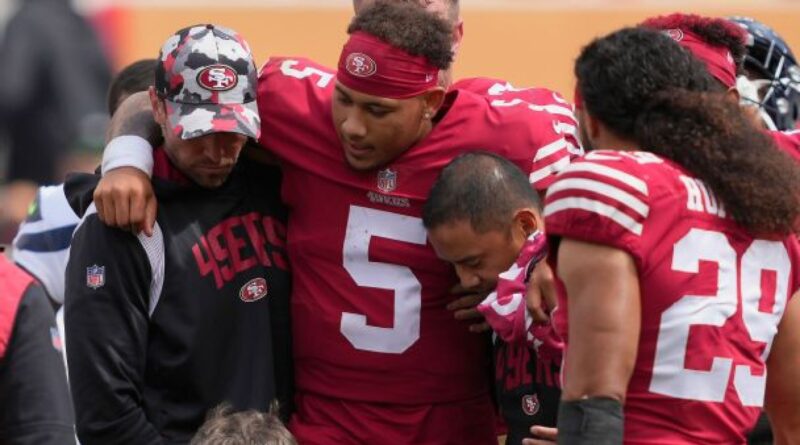 SANTA CLARA, Calif. — As the San Francisco 49ers watched quarterback Trey Lance leave on a cart with his right leg in an air cast, the unmistakable feeling of “here we go again” washed over the sideline.

It didn’t take long to figure out that Lance’s injury was serious. Soon after Sunday’s 27-7 win against the Seattle Seahawks, coach Kyle Shanahan announced that Lance has a fractured right ankle that will require season-ending surgery. It’s the third time in six seasons under Shanahan that the Niners have lost their starting quarterback to a season-ending injury. It happened to Jimmy Garoppolo in Week 3 of 2018 (torn left ACL), Garoppolo in Week 8 of 2020 (high ankle sprain) and now Lance.

The previous two times, an injury to Garoppolo was a death knell for the Niners’ season. He missed a combined 23 games in those two seasons and the Niners spiraled to a combined finish of 10-22. But the Niners believe things will be different this time because it’s Garoppolo who will be replacing the injured quarterback.

“We feel very fortunate to have Jimmy here as our No. 2 quarterback, and especially when your starter gets hurt, it’s good to know the experience and how good of a player he is,” Shanahan said. “We have been in this before, and I do feel we’re a little more prepared with our backup right now.”

On Sunday, the mood in the locker room after a decisive victory against a division rival was understandably somber as the Niners worried about their young franchise quarterback.

While the potential for quarterback controversy this season has disappeared, Lance’s injury raises a new batch of questions.

What is the plan at quarterback?

For 2022, the plan is simple: Garoppolo will start in Lance’s place. It’s the job he knows best after making 45 regular-season starts for San Francisco since he was acquired in 2017. The 49ers have had plenty of success with Garoppolo under center, going 31-14 in the regular-season games, 4-2 in postseason and making a trip to the Super Bowl.

Rookie Brock Purdy will be the No. 2 quarterback behind Garoppolo. Purdy was “Mr. Irrelevant” in the 2022 NFL draft, as the 49ers used the last pick (No. 262 overall) on him. He’s now one snap away from gaining plenty of relevance.

“My mindset hasn’t changed,” Purdy said. “I’ve been ready. I’ve studied as if I’ve been the starter for the week, so my role is now different in terms of suiting up and being ready to go in just in case something happens.”

The Niners aren’t expected to add another quarterback to the roster but will likely need to find another arm for the practice squad.

What does this mean for Lance?

Lance’s injury carries significant implications in the short and long term. The Niners spent the offseason and training camp with Lance as the starter. That meant some tweaks to San Francisco’s approach, with more designed quarterback runs and deep passes integrated into the offense. They’ll have to return what they’ve done well with Garoppolo, which could take some time given Garoppolo will be practicing with the starting offense for the first time since January.

Of more importance is what this means for Lance’s future. He played sparingly as a rookie and wasn’t even five full quarters into the season before the injury, which means the Niners still don’t really know what they have in him. That doesn’t even account for how Lance is going to recover or what he will look like when he returns.

The Niners knew Lance would take some lumps this season as he learned on the fly, but the hope was he’d progress and the defense and run game could keep the Niners competitive. Now he doesn’t get the chance. Assuming Lance returns in time to start the 2023 season, he will have had five starts since 2019, his redshirt freshman season at North Dakota State.

There’s a financial aspect, too. Part of the appeal of handing the keys to Lance was the Niners would have him on a reasonable rookie contract that would allow them to allocate resources elsewhere. Lance will count $7.75 million against the cap this year but will be another year closer to free agency when he returns from injury.

“It’s unfortunate for him,” Shanahan said. “We’re really hurting for him, and we were really hoping to see a lot of him this year.”

What does this mean for Garoppolo’s future?

When the Niners brought Garoppolo back, they believed he was the ultimate insurance policy. A quarterback who had been under center for two trips to the NFC Championship Game and Super Bowl LIV for $6.5 million guaranteed was a no-brainer despite any potential awkwardness that might go with it.

Sunday offered a sobering reminder of why, after Lance — who had suffered knee and finger injuries in a limited sample last year — suffered his ankle injury. The Niners hoped such a scenario would never arrive but at least found solace that Garoppolo was there to step in.

The irony lies with Niners having to count on Garoppolo to stay healthy to stay in contention. The No. 1 reason the Niners wanted to move from Garoppolo to Lance was because of Garoppolo’s inability to stay healthy. That Lance’s injury happened so early means Garoppolo has to try to stay on the field for at least the next 15 games.

Ross Dwelley won’t be denied as he muscles across the goal line to score a touchdown for the 49ers in the second quarter.

It could also mean big things for Garoppolo’s bank account. As part of his reworked contract, Garoppolo has more than $8 million in incentives based on playing time and performance. For example, he gets $250,000 for every game in which he takes at least 25% of the offensive snaps, $100,000 for every win in those games.

And though Garoppolo has a no-trade clause, there’s zero chance he will be dealt now. The other notable addition to Garoppolo’s contract was a no-tag clause, which means he can become an unrestricted free agent after the season and the Niners can’t prevent him from testing the market.

That could turn out to be more meaningful than anyone imagined when the deal was announced.

What happens if Garoppolo has a good year and the Niners go deep into the postseason? Would the Niners feel comfortable turning it over to Lance? Is it possible the Niners would want to pay a premium to bring Garoppolo back?

Those are questions that will be answered in time, but the fact that they can already be asked tells you all you need to know about this unique situation.

“It’s never about you,” Garoppolo said. “It’s about winning football games. I’m a big believer in that. People can say whatever they want, talk stats, whatever, but when you win football games, that’s what we’re here to do. And that’s all I’m trying to do.”