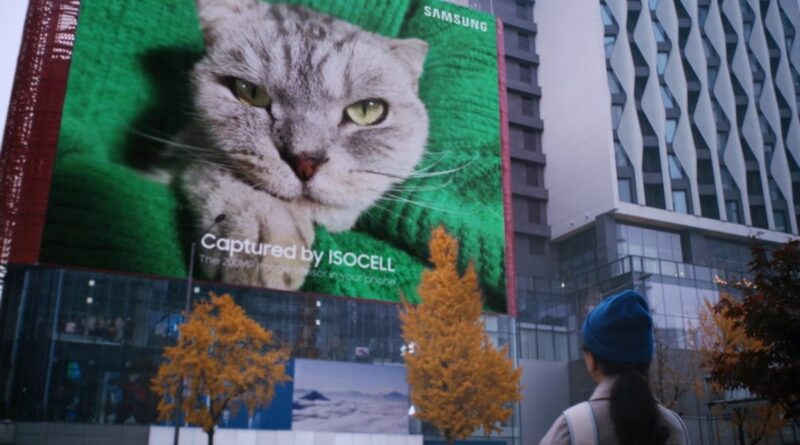 Samsung just teased the marquee feature for its upcoming flagship smartphones, and it’s downright adorable—the teaser, that is. Anyhow, to flex the capabilities of its upcoming 200-megapixel mobile image sensor, Samsung took the obvious route: snap a photo of a sweet housecat, blow it up to be roughly 1.5x the size of a basketball court, then hang it on a building for everyone to see how detailed it is.

Samsung, you have our attention.

The promotion was created using the ISOCELL HP1 200-megapixel sensor Samsung revealed last year. It has 0.64-micron pixels, which are much smaller than what you find on cameras with lower resolution. Smaller pixel size means less light captured, so Samsung uses a technique called pixel binning, which combines adjacent pixels into one superpixel.

In this case, a 4×4 grid consisting of 16 pixels is stacked together using a technology called ChameleonCell. The resulting pixels are a massive 2.56μm, making them more capable of absorbing light to create a brighter, clearer photo in darker conditions. Under ideal lighting conditions, you can use the sensor’s full 200MP pixels to capture ultra-sharp photos, then zoom in or blow them up without them looking grainy.

And that’s exactly what Samsung did to create this promotion. Using a test board instead of a smartphone, photographers at Samsung captured an image of a housecat, a popular subject for photos and one where having a high-resolution image allows you to see fine details, like whiskers and fur.

After adjusting the contrast and focus, the photo was captured and then printed onto twelve separate 2.3-meter-long fabric pieces that were stitched together to create a 616 square-meter image. It was then transported by truck and installed on the wall of a building using a crane.

I would have to see the photo in person to give a fair assessment, however, the results are undeniably impressive from what is shown in the images and videos provided. The kitty photo looks tack-sharp and reveals details you otherwise couldn’t see from a standard 12MP lens.

“I couldn’t believe my eyes when I saw the raw image enlarged to 100%,” said Hyunjoong Kim, project manager from the Global Marcom Team of Device Solutions Division at Samsung Electronics. “I was truly astonished by the degree of detail. In that moment, I knew any prejudices I previously had regarding smartphone photography had been proven wrong.”

It’s worth emphasizing that adding megapixels doesn’t always result in better image quality. You still need good optics and intelligent processing, so there is no guarantee that these 200MP shots will help Samsung leapfrog Google and Apple on the imaging front. Also, taking raw 200MP photos will quickly eat into the storage on your phone, and whichever social platform you upload to (Instagram, Facebook, etc.) will inevitably compress the hell out of it.

Along with capturing bright images in dark conditions or high-res shots in daylight, the 200MP sensor is also being marketed as an ideal tool for capturing 8K videos at 30 frames per second. Now we’re just waiting for Samsung to reveal which phones will be the first to use the sensor. If I had to put money on it, the Galaxy S23 seems like the prime candidate.