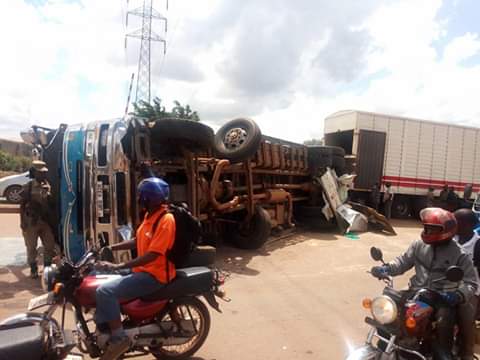 A heavy loaded truck registration number; UBD 932R that was hit by a train between Electoral Commission offices and Kitgum House

The accident on the short stretch that goes to Mukwano Roundabout just at the railway line happened early today morning.

It is alleged that at a time the truck was hit by the train, the driver had earphones plugged in his ears and couldn’t hear the loud train hoot.

The train, enroute Namanve, hit the rear part of the truck that was fully loaded with sacks of maize so hard that it (truck) staggered and lost control and fell on its side in the middle of the road, blocking the greater part of the road and causing heavy traffic.

It is also alleged the driver lost his life.

The accident brought about heavy and slow moving traffic still around the sixth, seventh, eighth streets and neighbouring roads/areas as the fallen truck was being prematurely offloaded to be towed away.

The situation is however back to normal traffic-wise.