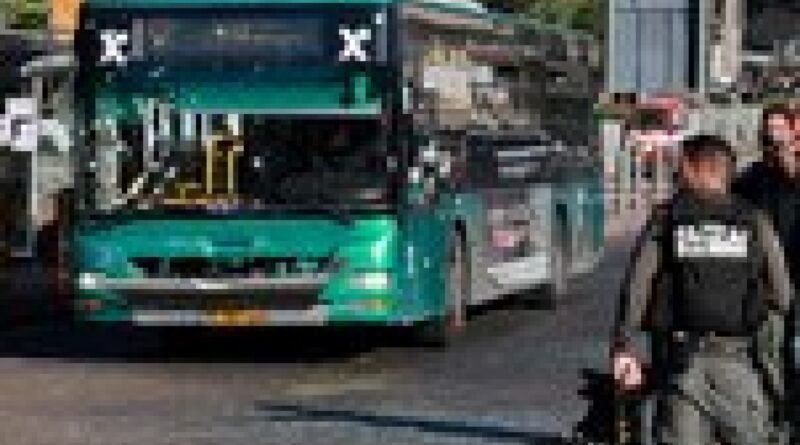 JERUSALEM — Two blasts in Jerusalem killed one person and injured at least 18 others during the morning rush hour on Wednesday, the Israeli police said, in what were the first bomb attacks on Israeli civilians in more than six years.

The explosions came as Benjamin Netanyahu, the former and likely future prime minister, was attempting to form what would be Israel’s most right-wing government in history. They prompted calls by far-right leaders, who have pressed for tougher action against terrorism, for the announcement of a new administration as soon as possible.

The blasts occurred amid the deadliest wave of violence in Israel and the occupied West Bank since 2015, and followed the killing of a Palestinian teenager during a firefight between Israeli soldiers and Palestinian militants overnight in the northern West Bank.

The police said that the first explosion Wednesday occurred at a bus stop in northwest Jerusalem at 7:05 a.m., killing one and injuring several others. Half an hour later, another blast at a bus stop about two miles to the north wounded at least three more people. Both blasts were caused by explosive devices planted at the scene, police said.

Four people were seriously wounded in the explosions, according to an ambulance service, Magen David Adom, which took them and several others to hospitals elsewhere in the city.

The blasts were the first on the Israeli transport system since April 2016. The Israeli police commissioner, Kobi Shabtai, said the two explosions constituted a “complex attack” since they may have been perpetrated by two different people who placed the explosive devices.

The blasts were smaller and less sophisticated than the bomb attacks that killed hundreds of Israelis during a Palestinian uprising two decades ago. Images from the blast sites on Wednesday showed broken windows and pockmarked windscreens but no structural damage to nearby vehicles.

But officials and analysts described the blasts as a departure from the less sophisticated, “lone wolf” attacks of recent years.

Omar Bar-Lev, the departing minister of public security, said the bombs were clearly not the work of “somebody who decided this morning to carry out an attack.”

According to initial reports in the Israeli news media, the bombs were placed in bags that were left at the two scenes and were detonated remotely, within half an hour of each other, and they contained nails and metal balls.

Moti Gabbai, the driver of a bus at the site of the second blast, said on Israeli television that the explosion occurred after he pulled into a bus stop, his vehicle full of passengers.

“There was hysteria,” Mr. Gabbai said, adding that he saw several victims wounded by flying glass.

The explosions occurred against the backdrop of rising Palestinian anger at the entrenchment of Israel’s 55-year occupation of the West Bank and blockade of the Gaza Strip. They followed a wave of violence that began in the spring, when Arab assailants killed 19 Israelis and foreigners in five attacks between March and May.

Those incidents led the Israel Army to intensify its raids on militants in the West Bank, mounting a campaign that has left more than 100 Palestinians dead and prompted another surge of Palestinian militancy — including an attack last week at a West Bank settlement, where a Palestinian killed three Israelis.

Many of the Palestinians killed in the West Bank this year were militants, but some were civilians. They included a Palestinian American journalist, Shireen Abu Akleh, who was shot and killed during a raid in May, likely by an Israeli soldier, in a case that Palestinians saw as emblematic of their experiences under occupation.

Rising violence by settlers against Palestinians in the West Bank, coupled with Israeli efforts to evict more than 1,000 Palestinians from their homes there, has also compounded Palestinian anger.

The blasts on Wednesday occurred as Mr. Netanyahu, the winner of an election on Nov. 1, was locked in coalition negotiations that have centered on the future role of Mr. Netanyahu’s far-right allies, without whom Mr. Netanyahu cannot form a government.

Two far-right lawmakers want Mr. Netanyahu to appoint them to powerful leadership positions within the Israeli security system — and one immediately used the blasts on Wednesday to give momentum to their efforts.

Itamar Ben-Gvir, who is seeking to lead the ministry for public security, a powerful role that would give him control of the police, quickly went to one blast site and called for a speedy conclusion to the coalition negotiations.

“We must form a government as fast as possible,” Mr. Ben-Gvir said. “Terrorism is not waiting.”

Israel’s security forces need to “go back to controlling the state of Israel and go back to deterring terrorism,” Mr. Ben-Gvir said to reporters at the scene. “This is organized terrorism and today’s terror needs to pay a very heavy price,” he added.

Mr. Ben-Gvir’s party performed better than ever before in the election this month, after campaigning on a promise to take tougher action against both armed Palestinians and also Israeli citizens whom he called “disloyal” to Israel.

Mr. Ben-Gvir has a history of incitement against Arabs, including criminal convictions for racism, and once hung a portrait in his home of an Israeli extremist who killed 29 Palestinian worshipers at a mosque in the West Bank in 1994.

Mr. Ben-Gvir’s rise has prompted fear among Palestinians, as well as threats of retaliation. On Wednesday morning, a spokesman for Palestinian Islamic Jihad, a militant group, told a Palestinian radio station that the attack sent a message to the Israeli right, mentioning Mr. Ben-Gvir by name, as well as Bezalel Smotrich, another extreme right leader who wants to oversee the Israeli Army.

Both Islamic Jihad and Hamas, the militant group that runs the Gaza Strip, described the attacks as a response to Israeli raids earlier this year at the Aqsa Mosque compound in the Old City of Jerusalem, but stopped short of claiming responsibility.

In recent years, the Israeli police have made it increasingly easy for Jews to pray there, angering Muslims and upending decades of convention that allowed Jews to visit but not worship.

The wider situation was further complicated this week by the death of an Israeli citizen after a car accident in the northern West Bank.

The body of the victim, a member of Israel’s Arabic-speaking Druze minority, was later seized from a Palestinian hospital by Palestinian militants, who are seeking to exchange it for the bodies of dozens of Palestinians accused of terrorism, which are currently held by the Israeli government.

If the body of the Druze victim is not returned, analysts expect the Israeli Army to face pressure to rescue it — a risky operation that could make the situation even more volatile.

Reporting was contributed by Gabby Sobelman from Rehovot, Israel; Hiba Yazbek and Raja Abdulrahim from Jerusalem; and Iyad Abu Hweila from Gaza City.