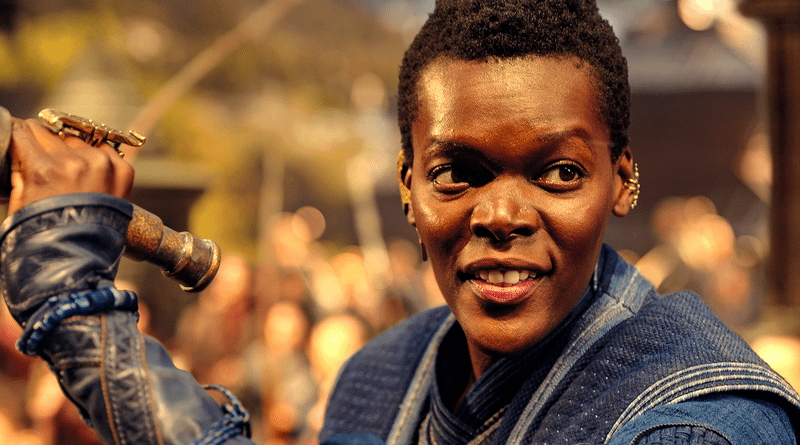 Ugandans raising flags for this country are rapidly budding of late more so from all dimensions like sports, music, movies and many more. Weeks after we had teenage singers Esther and Ezekiel on the Canada’s Got Talent stage with a wowing performance we bring to you another one in the movies.

Latest on the list is Ugandan-British actor Sheila Atim who was among the Marvel newcomers that appeared in the Doctor Strange and the Multiverse of Madness cast, shows up as Sara, one of the fearless sorcerers tasked with defending Kamar-Taj during the deadly siege on the headquarters of the Masters of the Mystic Arts.A classically trained actress, Atim has popped up in major stage productions throughout England, including several stints at Shakespeare’s Globe in plays like Othello and The Lightning Child. Atim’s TV work is just as impressive with appearances on shows like Harlots, The Feed, The Irregulars, The Underground Railroad, and more. She has also had roles in movies like Bruised and The Show. She’ll next appear in Gina Prince-Bythewood’s The Woman King alongside Viola Davis, Lashana Lynch, and John Boyega.

Sheila Atim was born in January 1991 in Uganda and moved to the United Kingdom with her mother at the age of five months. She grew up in Rainham, London, and attended the Coopers’ Company and Coborn School school. Atim did some occasional modelling as a teenager after having been recruited when she shaved the side of her head for a school prom. Atim appeared in a 2009 London Fashion Week event called All Walks beyond the Catwalk, organized by the British Fashion Council to showcase clothes that were for “real women”. She later said that “modelling was never a big earner for me. I was unusual looking, so I couldn’t go for commercial castings.”

Atim went to King’s College London where she graduated with a degree in biomedical science and trained as an actor at the Weekend Arts Centre in Belsize Park, London. Sheila became involved in a workshop for a new play, The Lightning Child, which led to her being cast by her acting teacher Ché Walker for her professional acting debut at Shakespeare’s Globe in 2013. Atim starred Keira (the physical embodiment of obsessive-compulsive disorder) in Ghost Town at the York Theatre Royal in early 2014.

She had a non-speaking part of The Woman in Les Blancs at the National Theatre, London in 2016. The Stage said of her performance that “at the centre of the narrative is its most potent character: a gaunt, stooped and silent woman.” The New York Times described a “spine-tingling production” and suggested that Atim’s character may be an emblem of Africa. The Times later referred to her performance as “mesmerising”.

She has since starred with Ako Mitchell in Walker’s two-hander Klook’s Last Stand, being praised by The Guardian for energetic performance and “tremendous stage presence” by The Daily Telegraph. In 2014, Atim appeared in Rachel at the Finborough Theatre. She later joined the touring production of Kate Tempest’s Hopelessly Devoted. Atim is also known for playing three roles in Royal Shakespeare Company (RSC) productions: the Attendant in The Jew of Malta, Julia in Love’s Sacrifice, and Assistant to Lady Politic Would-Be in Volpone. Walker’s The Etienne Sisters, which included songs composed by Atim, opened two days before the end of her run in Volpone. In 2019, Atim was named one of the casts’ of the Game of Thrones prequel series Bloodmoon.

She so far has a total of 22 credits

The Woman King (post-production) as Amenza 2022

Doctor Strange in the Multiverse of Madness as Sara 2022

Royal Bastards: Rise of the Tudors (TV Mini Series) as the Storyteller 2021

The Show as John Conqueror 2020

Meow or Never (Short) as Pucha the Catstronaut 2020

National Theatre Live: Les Blancs as The Woman 2020/I

The Understudy as Nora Harper 2020

Sulphur and White as Samira 2020