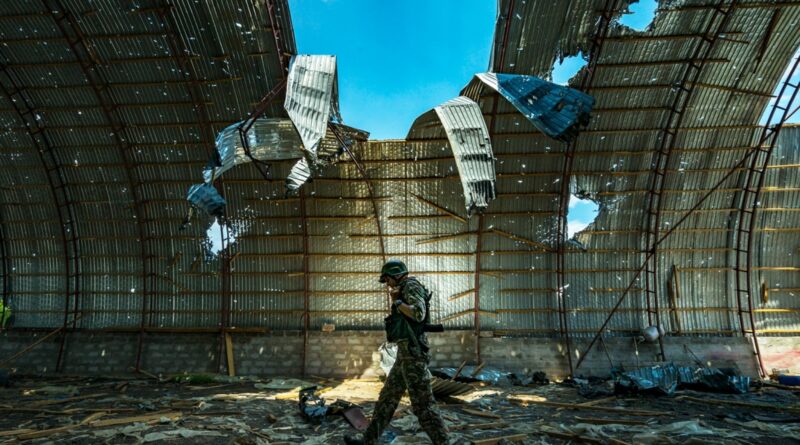 UMG is the first music company to receive the honor, given mostly for humanitarian relief efforts, joining Google, Microsoft and Amazon.

A ukrainian soldier walks inside a destroyed barn by russian shelling near the frontline of the Zaporizhzhia province, Ukraine.

Ukrainian President Volodymyr Zelenskyy has awarded Universal Music Group the Ukraine Peace Prize for its support of Ukraine during the country’s war with Russia.

At a ceremony on Monday (Sept. 5) at UMG’s Belgium headquarters in Brussels, Olha Stefanishyna, Ukraine’s deputy prime minister for European and Euro-Atlantic integration, presented the award to Frank Briegmann, UMG’s chairman and CEO of Central Europe.

UMG, which was among the first major labels to declare its support for economic sanctions against Russia after it invaded Ukraine on Feb. 24, is the first music company to receive the award from Ukraine.

“Since the beginning of the full-scale invasion, Universal Music has proven that they are true friends of Ukraine,” Stefanishyna says.

UMG executive vp Michele Anthony also played a central role in Global Citizen’s “Stand Up for Ukraine” social media rally in April, which helped raise more than $10 billion for Ukrainian refugee relief through the European Union’s pledging summit. The event brought together hundreds of thousands of global citizens, including many UMG artists, as well as other musicians, athletes, actors, creators and activists.

The label also helped organize various charity concerts that generated millions of dollars for relief efforts. In July, UMG labels Decca Classics and Deutsche Grammophon partnered with New York’s Metropolitan Opera to release A Concert for Ukraine, an album recorded live at the Met on March 14 featuring a special concert in support of Ukrainians. Conducted by music director Yannick Nézet-Séguin, the album opens with the National Anthem of Ukraine, featuring Ukrainian bass-baritone and Lindemann Young artist Vladyslav Buialskyi. Proceeds from the sale of the album were donated to charities supporting relief efforts in Ukraine.

Numerous UMG artists also raised millions of euros at the Berlin charity concert “Sound of Peace,” including Sarah Connor, Rea Garvey and David Garrett. And a charity concert in Poland, arranged with a choir and orchestra of Polish and Ukrainian musicians, was broadcast in 50 countries, UMG says.

UMG artist Sting re-recorded his song “Russians,” pledging profits to the HelpUkraine.Center (www.helpukraine.center), a volunteer storage center established by Ukrainian business owners to receive humanitarian and medical aid from around the world.

“Throughout history, music has served as a beacon of inspiration and hope and healing – and helping to bring peace to those affected by violence,” Briegmann said in accepting the award. “The Russian military invasion in Ukraine affects millions with urgent humanitarian needs – from food and water to shelter and clothing. Universal Music and our employees and artists are proud to support groups that are on the ground providing lifesaving, humanitarian assistance to those most vulnerable.”

Other recipients of the Ukraine Peace Prize include Microsoft, Google and Amazon (for its Amazon Web Services, or AWS).

Volodymyr Zelenskyy makes a speech on evaluation the 22nd day of the Russia-Ukraine war during virtually addressing in Kyiv, Ukraine on March 17, 2022.