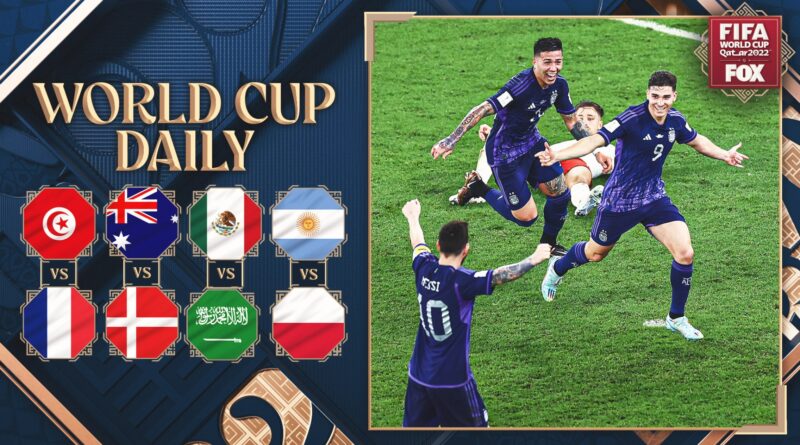 After being on the losing end of one of the greatest upsets in World Cup history, Argentina will go into the knockout stage as a group-winner. Unfortunately for Mexico, Argentina came just a few goals short of pushing it through as well.

Here’s everything that happened at the World Cup on Wednesday and what to watch for on Thursday.

France will go into the round of 16 with a loss on its record after Antoine Griezmann’s last-minute equalizer was called offside by VAR. Fortunately for Les Bleus, a 1-0 loss wasn’t enough to knock it from the top spot in Group D, or for Tunisia to advance. It will go on to play Poland on Sunday (10 a.m. ET on FS1 and the FOX Sports app).

Tunisia took on France in the final group stage game for both teams in the 2022 FIFA World Cup.

The Socceroos secured their spot in the knockout stage with an upset win against Denmark, a team ranked 28 spots higher in the FIFA men’s rankings. Australia will play Argentina on Saturday (2 p.m. ET on FS1 and the FOX Sports app). Denmark was eliminated with the result.

Australia and Denmark faced off in their third matches of the 2022 FIFA World Cup.

Mexico came so close to doing everything it needed to do to advance to the round of 16, but its yellow cards and Saudi Arabia’s late goal ultimately knocked it out of the tournament. Mexico’s seven-tournament streak of making it to the knockout stage is now over. Saudi Arabia was also eliminated with the result.

Saudi Arabia and Mexico faced off in their third matches of the 2022 FIFA World Cup.

Argentina and Poland both advanced with Wednesday night’s result, but Argentina took the top spot from Poland. Poland will now play France on Sunday, and Argentina will play Australia on Saturday.

Poland and Argentina squared off in the group stage of the 022 FIFA World Cup.

GOAL OF THE DAY

Had this been the goal that sent Mexico through to the round of 16, it would have been one of the greatest goals in El Tri‘s long history at the World Cup. Instead, it’s just our Goal of the Day. Take a bow, Luis Chávez.

SAVE OF THE DAY

Any one of Wojciech Szczęsny’s saves could have been the Save of the Day, but any time you save a penalty taken by arguably the greatest player of all time, it’s worth highlighting.

On the night, Szczęsny had nine saves, including eight saves from shots taken inside the box.

Croatia’s path to the knockout stage is simple: a win or a draw, and it’s in. Belgium’s is much more complicated. While it can also advance with a win or a draw, a draw would have to be accompanied by a Canada win against Morocco — and even then it would go to a tiebreaker with Morocco based on goal differential, a category in which Morocco has a two-goal advantage.

Belgium isn’t the team Morocco has to worry about entering a tiebreaker with, for all the aforementioned reasons. Croatia, on the other hand, poses a serious threat in the event Morocco loses to Canada and Belgium beats Croatia, as Croatia currently has the advantage in goal differential. Suffice to say, Morocco would rather win or draw.

The only scenario in which Spain doesn’t advance is a Japan win and a Costa Rica win vs. Germany, which, on paper, is unlikely. However, Japan has already pulled off one upset in this year’s tournament and Costa Rica’s coming off of a confidence-boosting win against Japan. La Roja would be wise not to tempt fate.

Germany needs a win and a Spain win vs. Japan to avoid getting knocked out in the group stage for the second consecutive World Cup. If Costa Rica wins, they’re in no matter what happens in Japan-Spain.

Check back in after every matchday of the 2022 FIFA World Cup!