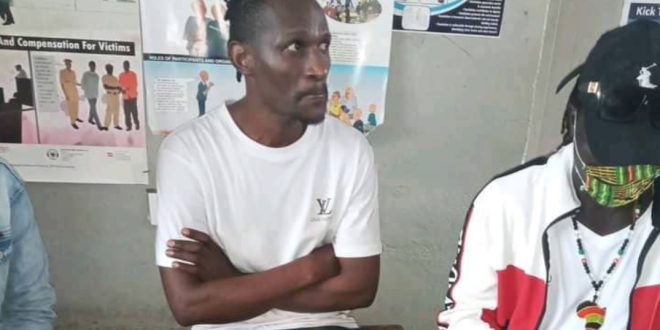 EJazz News has learnt that singer Blackskin at least spent a night in the coolers over the song Gyenvude that he wrote for Bebe Cool. Blackskin was put behind bars on Saturday, 27 November 2021 at Jinja Road Police station before he was released later.

Following an exchange of words, Bebe Cool has swung into action and thrown songwriter Blackskin behind the bars as he earlier on promised.

Blackskin’s arrest was confirmed by his friend producer Eno Beats who attached the arrest to the song ” Gyenvude” which Blackskin chose to release in his own version.

Blackskin, real name Frederick Ssenyonga, said he had not been paid by Bebe Cool after writing for him a new song dubbed “Gyenvudde”.

He vowed to send two faded artistes back into retirement because they do not want to pay creators yet they cannot make music on their own.

“Am going to send you in retirement you two faded artistes. You can’t make music and you don’t want to pay creators,” Blackskin wrote on social media.

He was later released on police bond but came out sending the same message, or even louder.

Read More Here: “I am Fighting For My Music And Time” Blackskin out of Jail, Not Remorseful.