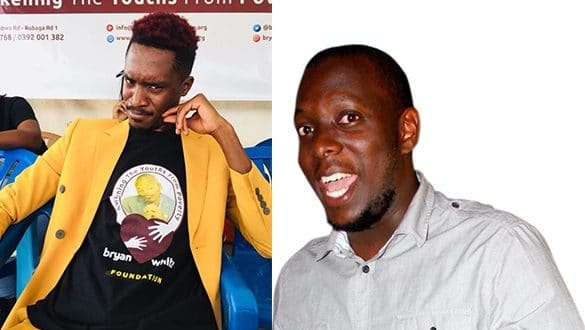 Brian White Finally Tames Kasuku and A Pass Onto The Podium.

After a long strugle by the podium master to drag more big profile people onto his podium, the money bag seems to be registrering success following the latest developments.

News has it that brian White has “big-headed” A Pass on the podium and motor-mouthed “Kasuku” as well. Inside sources have it that Kasuku was offered to be the secretary to the money bag, a thing we are yet to confirm.

The two have been seen actively participating in the currently on-going Arua activations by the camp fully clad in Brian White Foundation Uniforms.

A Pass and Kasuku join Zari Hussein who also joine the podium a few days back. Zari’s first appearance at the podium was today(Friday, 3rd August 2018) in Arua.

A Pass has on several occassions been heard emphasizing the fact that he can never be on the podium given that its memebers are used to carry sacks of posho which he at one time called disrespect.

A Pass Tells Haters To Join Weasel In Carrying Posho And Beans At The “Podium”.