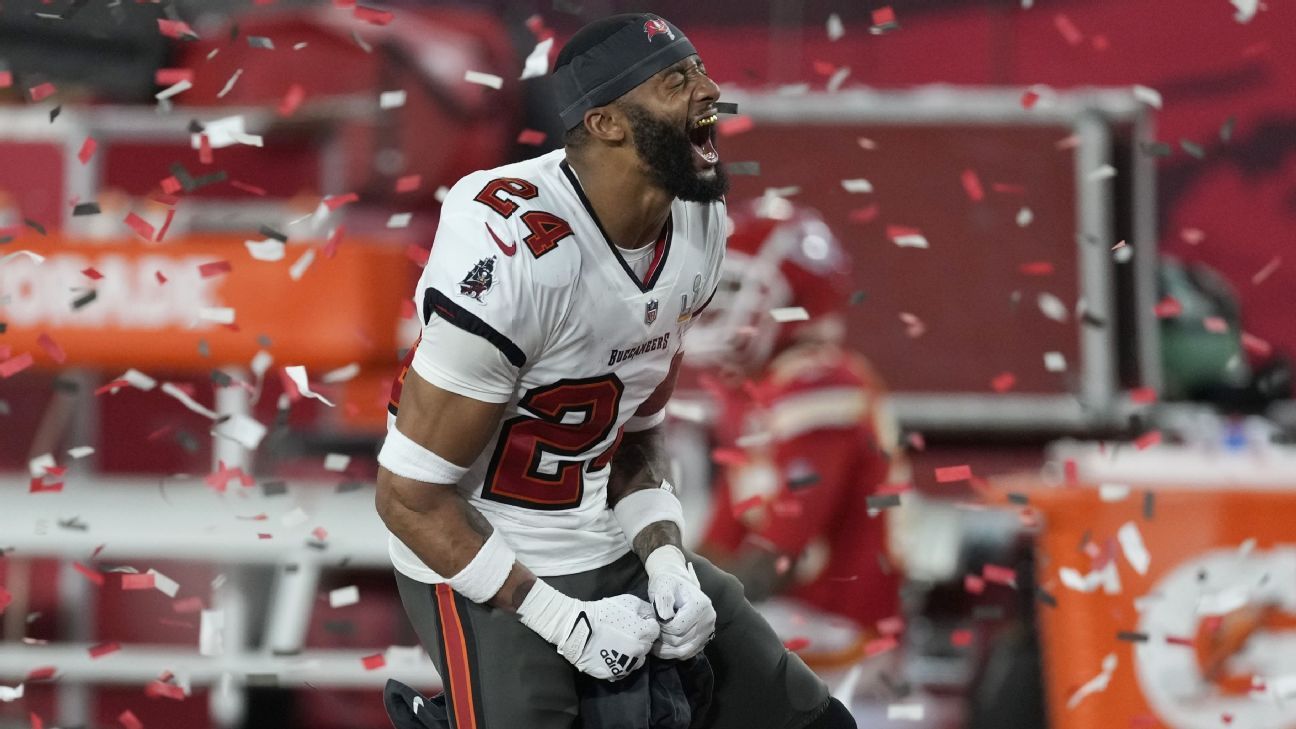 Bucs’ secondary aims to step out of Tom Brady’s shadow

“I don’t know what happened — it just happened,” cornerback Jamel Dean said of the transformation. “I was just thinking to myself, ‘Maybe we just finally grew up.’”

Grew up and got a new nickname, which originated from a tweet by Carlton Davis after the Bucs’ upset of the New Orleans Saints in the NFC divisional game, where they held Drew Brees to a 57.1% completion rate (and picked him off three times).

“I don’t have a island. I gotta graveyard,” Davis tweeted with a skull and crossbones emoji. The next day, he captioned a photo of safety Jordan Whitehead and inside linebacker Devin White with “Grave Diggers.”

It stuck. And the secondary lived up to it.

It held Chiefs QB Patrick Mahomes to a 53.1% completion rate, intercepting him twice (White produced a pick in that game as well as the game against the Saints). It also managed to hold off Packers quarterback and league MVP Aaron Rodgers in the NFC title game despite being down both starting safeties — Antoine Winfield Jr. and Whitehead — in the second half.

“That young secondary no one ever thought could do s—, look what you did!” Brady exclaimed in a rousing speech during the Bucs’ ring ceremony in which he called out each defensive back by name.

But outside of Brady and Bucs fans, the group remains largely anonymous — with the exception of Winfield because his father, Antoine Winfield Sr., played for 14 seasons — despite quietly helping the Bucs become one of the better defenses in the league. Winfield Jr. also gained notoriety for flashing the “peace out” sign to Tyreek Hill during the Super Bowl, mimicking the gesture Hill did to him after posting 269 receiving yards and three touchdowns in Week 12.

“All of us are unknown guys trying to make a name for ourselves,” said Sean Murphy-Bunting, a second-round draft pick out of Central Michigan in 2019 now entering his third year.

“I think in this game it’s all about respect, and I don’t think we got the respect that we wanted, as a DB corps or even as a defense,” said Carlton Davis, who held Pro Bowler Michael Thomas catchless on four targets in the NFL divisional round. “I think we have a point to prove this year. It’s all about respect, and this year, I plan on taking it.”

To Davis’ point, the first image that appears in a Google search of Davis’ name isn’t even Davis. It’s Murphy-Bunting, who led the Bucs with three interceptions and two pass breakups in the postseason, becoming just the fourth player in the Super Bowl era with a pick in each of his first three playoff games, joining Pro Football Hall of Famers Aeneas Williams, Ed Reed and Jason Sehorn.

“I don’t look at myself as being the guy who caught three interceptions in the playoffs,” Murphy-Bunting said. “I look at myself as the guy that is just ready to work every day. I’m an underdog, I’ve been an underdog my whole life, I’ve been overlooked my entire life. I’m not going to act like I’m a champion in that aspect, but the work ethic and everything like that will still stay high.”

There are a number of areas the Bucs’ secondary feels can be improved upon this year. For one, Dean, now entering his third season out of Auburn, is finally understanding the three-step technique, which requires eye discipline and anticipation and allows a cornerback to get a quick jump on a throw. He showed glimpses of that breaking up a slant pattern against the Atlanta Falcons in Week 17, but defensive coordinator Todd Bowles has really seen a change in Dean this training camp.

“I think a year ago, he couldn’t acknowledge that, so we had to do a couple different things not to let him in that situation,” Bowles said. “This year in that situation he’s seeing it like a true corner, from a growth standpoint. That showed a big step forward there, but we’ve got to keep working.”

“They’ve always had energy and effort. It’s just the technique things and learning route concepts,” Evans said. “They get better each year. I’m excited to see what they do this year. You come into this game and there’s a lot to learn. You’re going against the best of the best. You’ve gotta learn on the fly. This year will be their best year I think.”

Bowles has also worked with the group on having a better understanding of the ins and outs of his scheme and everyone’s respective roles in it, along with understanding the “whys,” versus just playing the defense that’s called. Doing so can allow players to take more calculated risks, when warranted.

“That first year, they throw so many things out at you just learning the scheme and things like that,” Winfield said. “But after being in the system for a year, I just feel like mentally my game is just sharper and a little bit better than last year…

“Over time, the more you do something, you get those same looks like, ‘OK, I know what I’m supposed to do now’ so I can play my game a little bit faster.”

This group will have the benefit of continuity, and the players feel it’s helping their communication. Davis, Dean and Murphy-Bunting are expected to be the starters at cornerback again, with Whitehead primarily lining up as a strong safety and Winfield free safety, and Mike Edwards rotating in at safety. There’s also the potential for Ross Cockrell, a key reserve last season, to be in the mix — possibly even at both positions after notching multiple interceptions this training camp, including a three-pick practice this week off of Blaine Gabbert and Ryan Griffin.

Coach Bruce Arians believes they can have more takeaways and more consistency, too. The Bucs were seventh in the league with 15 interceptions during the regular season, three up from 2019. But they had 55 pass breakups in 2020. A number of those plays were dropped interceptions.

“I can’t go for PBUs because apparently PBUs can’t get you All-Pro,” Dean said.

“One of the greatest corners I ever saw was Albert Lewis,” Arians said. “Same length [as Davis] — he looks a lot like him. Albert couldn’t catch. He won the title of batting balls away, but you couldn’t complete anything on him.”

But by comparison, the New England Patriots’ defense had 25 picks in 2019. The Chicago Bears had 27 in 2018. It should be noted, though, that interceptions were down leaguewide in 2020, with no team finishing with more than 18.

There’s also been an increased emphasis this year on situational football, including doing more two-minute situations, closing out halves, closing out games, red zone situations and coming out of halftime.

“They’re still just growing. They’re all very, very young,” Arians said. “The more understanding they have of what they’re playing, and what’s trying to be done to them, the better they can get. I would think the entire secondary can all get better — a lot better.”

“Our secondary is probably the best secondary in the game,” Evans said, “if I had to choose one.”