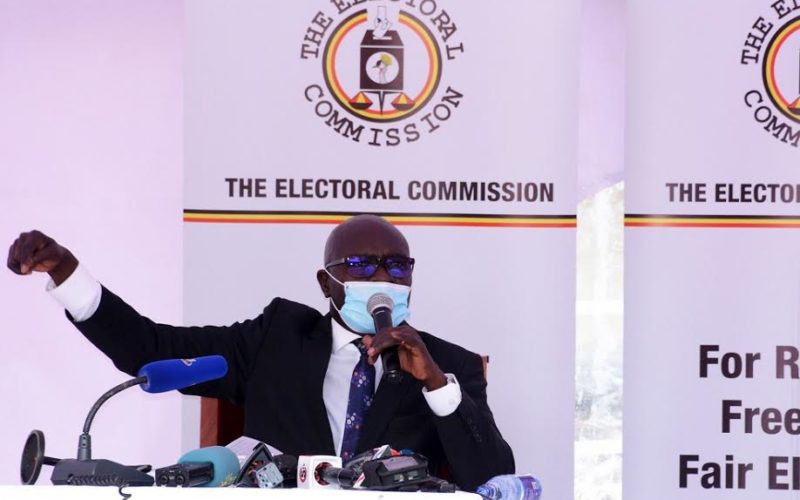 Close to 100 Electoral Commission-EC officials have undergone training on the use of electronic vote tallying display equipment ahead of the 2021 general elections.  The training targeted Information Communication and Technology officers, Returning Officers and their Assistants.

The training follows the purchase of video walls and screens, cybersecurity applications, and computers for use in the electronic result transmission. Paul Bukenya, the EC Spokesperson, says the equipment will be distributed to 147 tally centers across the country. He says the officials are expected to pass on the skills to staff under jurisdiction.

In its ruling, the Supreme Court Justices observed that in the absence of clear legislative provisions prohibiting the adoption of technology management in elections, the court could not prevent the EC from using technology to improve its efficiency.

In 2016, the EC introduced the technology in election management including the introduction of the National Voters Register, voter identity verification technology, Biometric Voter Verification System and electronic transfer of results.

Emmanuel Matsiko, the Kiira Region Returning Officer, told URN that his team of close to 90 people would train on how to use the new technology to display tallied results in real-time.

Charles Labelo, the Returning Officer Mbale City is one of those whose team has already benefited from the training. He says the training will improve their efficiency in managing the election results. Patience Nantege, an independent candidate for Kyadondo East parliamentary seat, says it is good that the Commission has established technology that will facilitate the auditing and verifying of election data to avoid mismanagement by a few individuals.

She asked the Commission to ensure that the technology used is simple, accurate and transparent to the voters. Dr. Stella Nyanzi, Forum for Democratic Change (FDC) Kampala Woman MP Candidate, said the use of technology will ensure political equity among stakeholder’s, accuracy, consistency and quality results.

“This intervention will contribute to addressing challenges which may arise in elections due to the human era if not manipulated, thereby facilitating free and fair elections,” she said. Achilles Lubega, the Makindye West National Resistance Movement-NRM party candidate, says the electronic display in tally centers will expose election anomalies that have manifested in the previous general elections.

“This is a government that has purchased such election equipment to make sure that they can properly display this information. The only problem we have is that we are fond of manipulating the equipment late in the night to alter or misinform elections stakeholders,” he said.