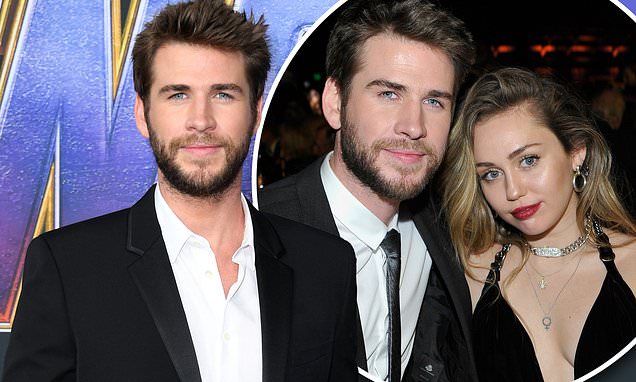 He split from Miley Cyrus in June last year, after just eight months of marriage.

But Liam Hemsworth appears to have finally found happiness after moving on from his broken relationship.

A source close to the Australian actor, 30, told E! News: ‘The way things ended between them didn’t sit well with him and he was saddened by it all.’

Finally moved on: Liam Hemsworth (pictured) is reportedly ‘happy and living a completely different life’ one year after splitting from his ex-wife Miley Cyrus

‘It took him time to come to terms with the end of their relationship and to process it all,’ the insider continued.

‘Liam is happy to have moved on and is living a completely different life now.’

Liam and Miley, 27,  called it quits in June last year after ‘drifting apart’, but they did not publicly confirm their split until two months later.

Relationship: An insider claimed that Liam feels like he’s in a ‘better place’ these days, after coming to terms with ‘the way things ended’ between him and Miley. Pictured in January 2019

Miley issued a statement via her publicist to People magazine at the time.

‘Liam and Miley have agreed to separate at this time. Ever-evolving, changing as partners and individuals, they have decided this is what’s best while they both focus on themselves and careers,’ the statement read.

‘They still remain dedicated parents to all of their animals they share while lovingly taking this time apart. Please respect their process and privacy.’

According to Page Six, Liam was blindsided by the separation announcement, which was released while he was visiting his family in Australia.

It’s over! Liam and Miley (pictured in June 2019) married in December 2018, but called it quits eight months later after ‘drifting apart’

Miley and Liam first started dating while filming the 2010 movie The Last Song, based on the romance novel of the same name by Nicholas Sparks.

Liam is currently in a relationship with Sydney model Gabriella Brooks.

Following her marital separation (and a brief fling with Kaitlynn Carter in August and September), Miley struck up a relationship with Australian singer Cody Simpson.

But she confirmed their split earlier this week and is now believed to be single.

Splitsville: Following the separation, Miley struck up a relationship with Australian singer Cody Simpson (right). But she confirmed their split earlier this week and is now believed to be single