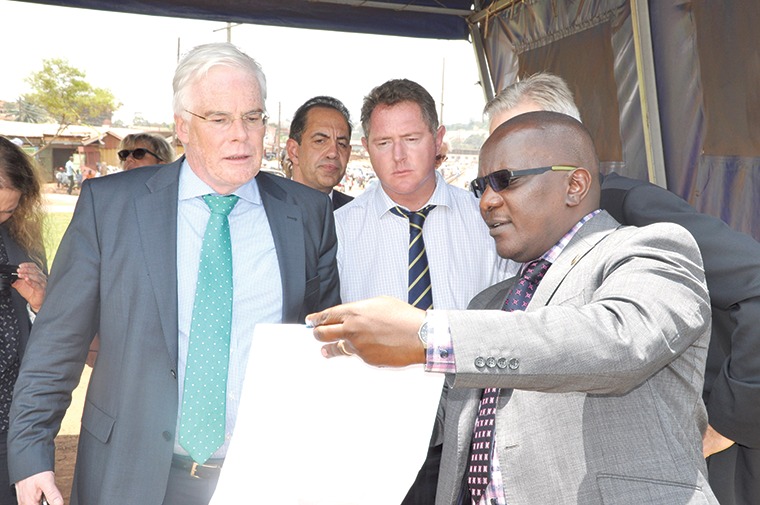 There is a popular saying that ‘it takes years to build a name,
but it takes just a minute to destroy it’. Based on the recent
turn of events, this has come true of Eng. Eng David
Luyimbazi Ssali, the man recently identified by President
Museveni to become the Deputy Executive Director of
Kampala Capital City Authority.

The man from Katikamu in Luweero spent over 15 years
offering dedicated service to the government of Uganda right
from the ministry of Works to the Uganda National Roads
Authority (UNRA). While at these two bodies, Luyimbazi was
at the forefront of over 50 major infrastructural projects,
most notably the Jinja Cable Bridge and the Entebbe
Expressway.

But in a quick turn of events, Eng Luyimbazi was forced to
leave his position as Director Planning at UNRA as the
Inspectorate of Government launched investigations into his
involvement in the procurement of a contractor for the
infamous Mukono-Katosi road.

Together with several top officials both at UNRA and the
Works ministry, Luyimbazi’s star was summarily blown out
and he walked out of government service with ‘tail coiled
between legs’. Even the state minister for Works, Eng
Abraham Byandala was shown the exit door for his
involment in this saga that saw over Shs 24bn meant for the
road construction lost to a quack contractor.

As events unfolded, the ever-ready malignant media
portrayed him and others as corrupt, selfish and unpatriotic
civil servants with the preoccupation of swindling taxpayers’
money.

Four years later, the inspector general of government, Irene
Mulyagonja, exonerated Luyimbazi of any wrongdoing in
this matter.

“This is to inform you that the inspectorate of government
did not find you culpable in the mismanagement of the
procurement of a contractor in the construction of the
Mukono-Katosi Kisoga/Nyenga road and therefore this letter
serves to clear you of any allegations made against you with
regard to that procurement.”

“Please be informed that the Inspectorate of government did
not cause the termination of your contract at UNRA. The
ordered suspension from duty by us was to pave way for the
then ongoing investigations about procurement of a
contractor for Mukono-Katosi/Kisoga Nyenga road. Before
our investigations were concluded, UNRA Board, your
employer then, chose to terminate your employment and
paid you your terminal benefits. We think that our
investigations may not have had a bearing on the
termination of your employment with UNRA.”

While Mulyagonja tried to distance her office from Eng.
Luyimbazi’s UNRA troubles that resulted in his shaming exit,
there is no running away from the fact that his sudden
downfall was a result of the IG investigations into the KAtosi
road saga.

Strangely, Mulyagonja’s letter was only addressed to
Luyimbazi, and the public was never informed about his

innocence, not the same way Luyimbazi and others were
paraded before the media when they were being thrown out
of office.

Even Luyimbazi’s former employers, UNRA, have never
come out to make a case for his innocence in the Mukono-
Katosi case; their only recorded appreciation for his service
was a termination letter!

Isn’t this a perfect example of character assassination? Why
would a man offer his entire adult working life to
government and be paid like this? Wouldn’t it have been
right for UNRA and IG to call a press conference and clear
the man’s name? What the world remembers about
Luyimbazi is a man who was fired by UNRA for fraud!

But like they say; it is not all doom and gloom. Amid his
troubles, Luyimbazi has remained steadfast since he left
government. Those close to him intimate that he remained
dedicated and professional in private practice, a virtue that
has landed him another shot at civil service.

For the president to head-hunt and approve someone for the
coveted post of KCCA management, it shows a high degree of
trust in both Luyimbazi’s person and expertise. It also

demonstrates the magnanimity of the HE the President not
to hold a good man down even after evidence shows that
person to be innocent as is the case for Eng. Luyimbazi

One just hopes that the political vultures at City Hall do not
drag down this talented national asset as was the case at
UNRA. Kampala deserves better; Eng Luyimbazi deserves
better. This may be a perfect combination.