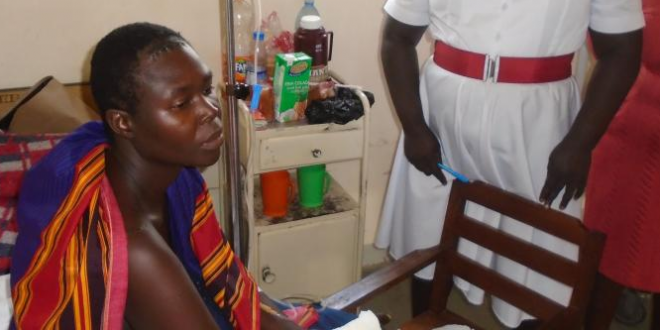 A man who hacked his wife in Luweero district, and left her with severe injuries, has been arrested after close to two weeks of pursuit.

Robert Masinde, a resident of Kamira trading centre in Luweero district has been on the run, from June 4, when he hacked his wife Jennipher Ajambo, a mother of six. The two had a misunderstanding after Ajambo allegedly rejected Masinde’s sexual demands.

To date, Jennipher Ajambo is still admitted at Bishop Ceaser Asili where doctors are treating severe wounds on her left arm and severe injuries sustained on the head and the stomach. Joyce Namigadde, the Luweero District Probation officer says that although wounds on head and stomach are slowly healing, Ajambo’s left arm is not yet in good health despite surgery on Tuesday.

Isah Ssemwogerere, the Savannah Regional Police Spokesperson says that Masinde was picked from a farm at Kakoola village in Kamira sub-county after a tip-off by residents. He faces charges of attempted murder.

Ajambo’s children were rescued from their home after the attack on their mother and transferred to Happy Children Child Care Centre for counselling.

Cases of domestic violence have been reported to be on the rise in the district during the time of the COVID-19 lockdown. so far, over  50 cases have been registered at the various stations across the district.

This week, the Probation Office registered two cases of a woman who poisoned herself after learning that the husband had married off another woman during the lockdown and another where a father assaulted a child leaving him in critical condition.